Car Split in Half, Occupants Ejected at Fatal Accident in Reading 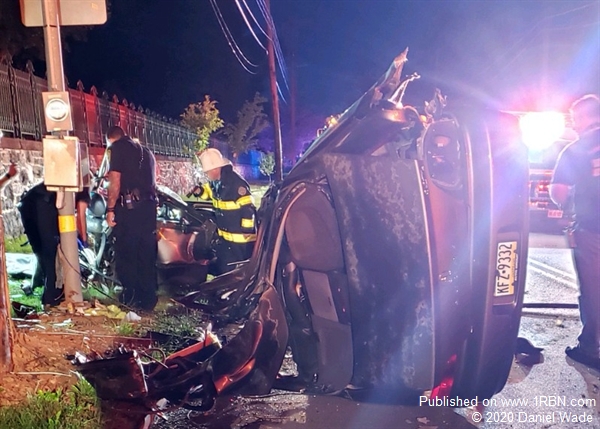 Photo by Daniel WadeDeputy Chief Larry Moyer and members of the Reading PD look over the wreckage of an accident in the 1300 block of Centre Ave. The vehicle struck a pole, causing it to split in two sections and eject both occupants.

Photo by Daniel WadeReading Firefighters arrived early on the morning of June 13th with this car split in half after an accident. The impact caused the ejection of both occupants.

Reading, PA - Around 4:30 A.M. on June 13th, dispatchers at the Berks County Department of Emergency Services received a phone call reporting a serious car accident with two people hurt in the 1300 block of Centre Avenue.

With companies responding, Chief Moyer (C7) requested an additional medic unit. Engine 7 arrived with a vehicle cut in half and two occupants ejected. As other units were pulling in, the company advised that one person was deceased and the other was in critical condition.

Crews began packaging the injured occupant while other members contained a large gas spill alongside the car. Paramedics transported the victim to the Reading Hospital Trauma Center. Companies cleared shortly after.