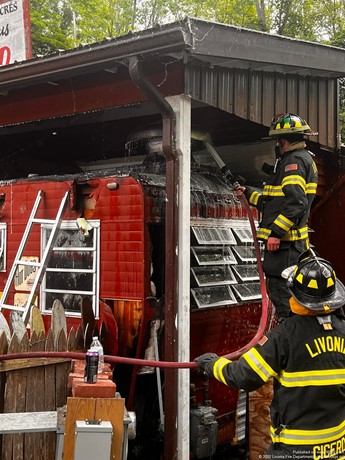 LIVONIA, NY - On Monday, June 6th at 4:49 P.M., Town of Livonia Fire Departments (Livonia, Hemlock & Lakeville), along with East Avon as the FAST, were dispatched to Serious Food at 5006 East Lake Road for a reported fire.

Assistant Chief Tom Strong arrived on scene and reported smoke showing. The crew of Engine 255 arrived on scene shortly after and was able to quickly extinguish the fire. The FAST team was rerouted to stand-by in the Lakeville fire station.

The cause of the fire remains under investigation by the Livingston County Office Of Emergency Management. In the meantime, the restaurant has moved its operations with a limited menu next door to the Shoreless Acres General Store.