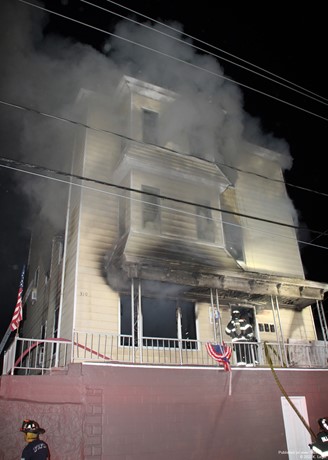 Photo by K. LegerSmoke pours from the structure.

First due Engine 9 reported smoke on approach, while Ladder 2 reported heavy flame showing from the first floor unit. Members stretched multiple attack lines to all floors and began an interior attack. After exhausting two SCBA bottles, two firefighters were brought to medical personnel on scene and after a check of vital signs, there became a need to transport both firefighters to local hospitals. Two residents were also transported after experiencing smoke inhalation symptoms.

Fire crews were backed out of the building at one point to go with exterior operations. This incident went to three alarms, with mutual aid required to back fill empty stations. A spare piece was put in service with overtime firefighters to do an overnight fire watch.