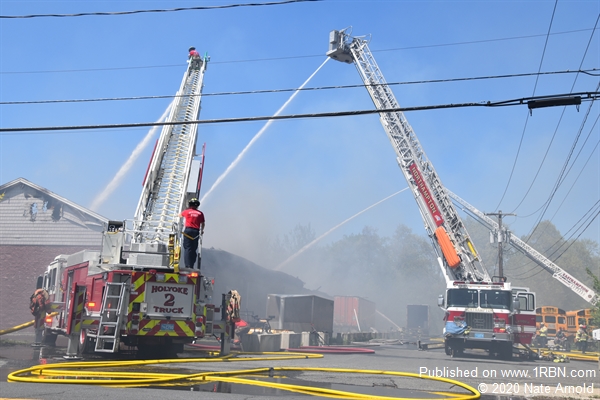 Photo by Nate Arnold A rare sight, ladders from Holyoke, Northampton and Easthampton work in concert, pouring water on the remains of 69 Ferry St. 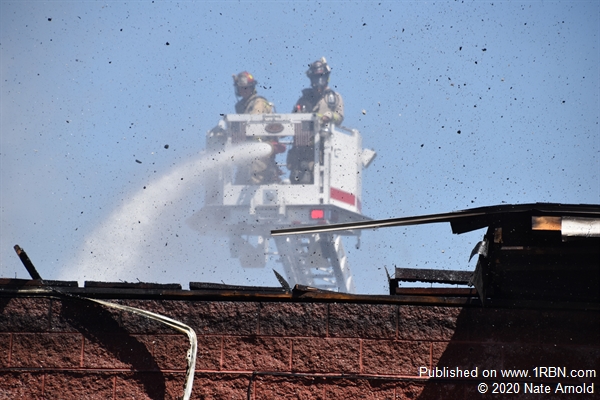 Photo by Nate Arnold Easthampton's Ladder 1 blasts soot and debris off the wall as they work their stream back and forth.

Easthampton, MA - A busy work day for a local auto repair shop turned terrifying shortly after 12:30 P.M. on Friday, May 22nd, when the shop's employees were warned that the building was on fire.

An alert Easthampton Police Officer who was out on routine patrol was the first to discover that the 50'x200' long building housing Full Tilt auto body was on fire, and made sure that the shop employees, who were unaware at the time their building was burning, evacuated safely while the alarm was sounded at the Easthampton Fire Department.

The EFD responded quickly, bringing two engines and a ladder-tower to the scene, but the fire, which had taken possession of the open web truss roof by this point was spreading from the 'Alpha' side to the 'Charlie' side quickly. Chief David Mottor wasted no time in striking alarms in rapid succession. The 2nd, 3rd, 4th and 5th alarms were sounded within 45 minutes.

Mutual aid crews from Northampton, Southampton, Hadley, South Hadley, Amherst, Holyoke, Hatfield and West Springfield soon descended upon Easthampton, responding either to the scene for manpower or to the station for city wide coverage.

Conditions on scene deteriorated rapidly early on with the fire taking total possession of the building, resulting in a structural collapse that caused minor injury to firefighters who were operating inside when the collapse started and were struck by falling debris. Thankfully, all members of all responding fire departments were able to pull out of the structure and switch to a surround and drown attack. Four aerial master streams, deck guns and large caliber hand lines were deployed to all sides of the building.

While the building is a total loss, crews managed to keep the fire contained to the building of origin. The cause of the fire is under investigation by the EFD, the EPD and the Massachusetts State Fire Marshal's Office. The Easthampton community has already rallied around this long time city business. As of this article's writing, a GoFundMe page set up to take donations to help the owners rebuild had already received several thousand dollars in donations.