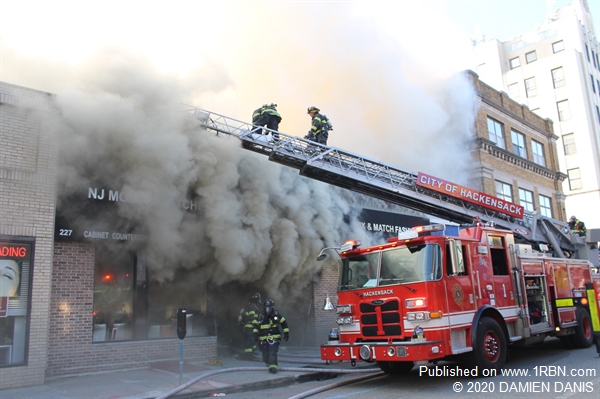 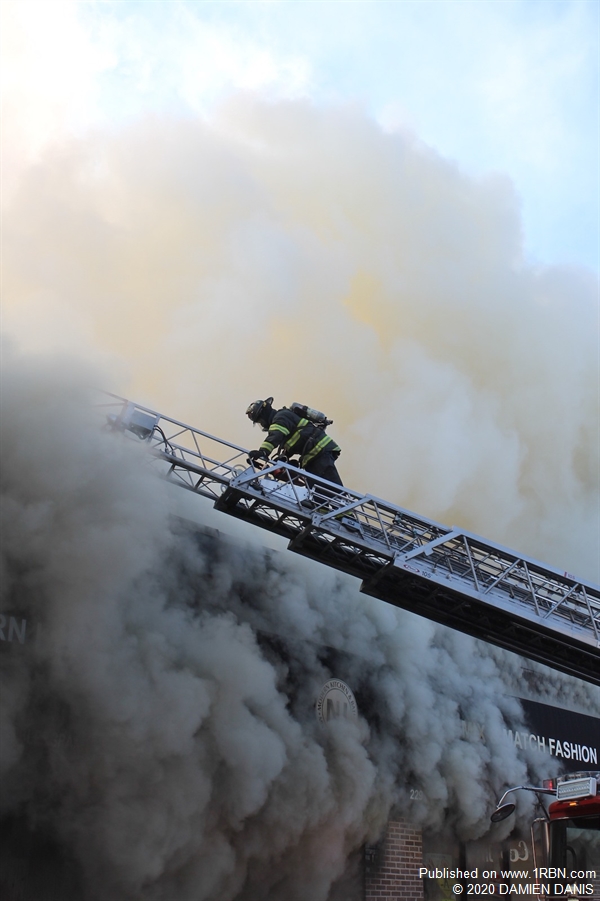 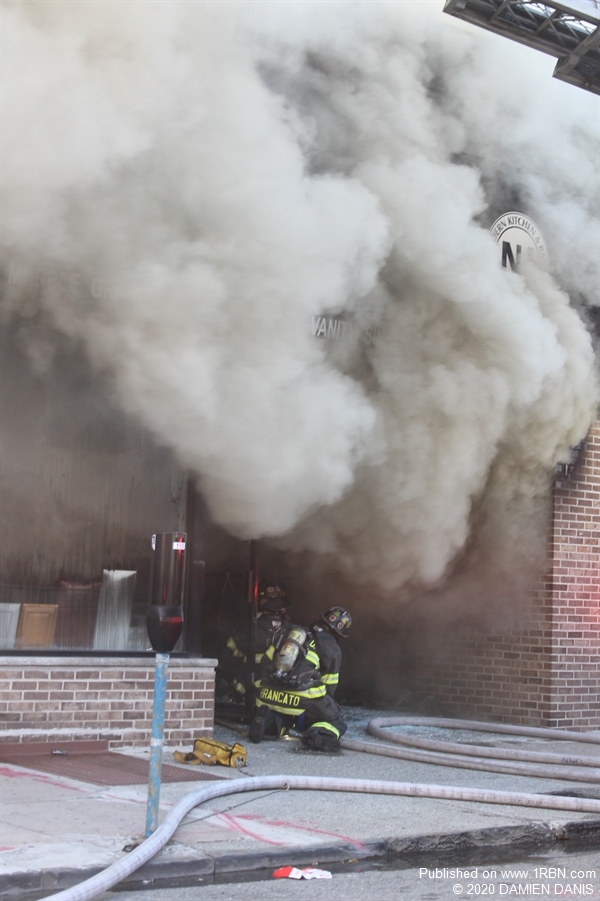 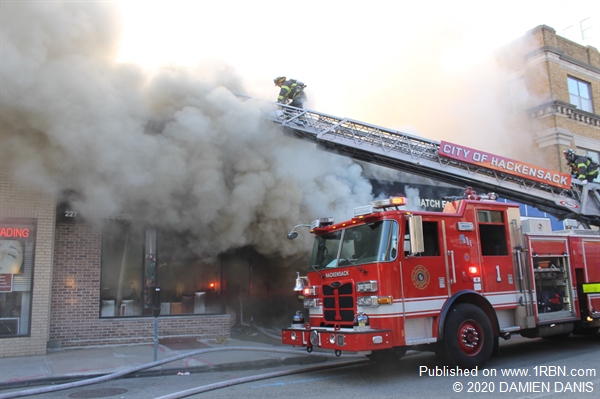 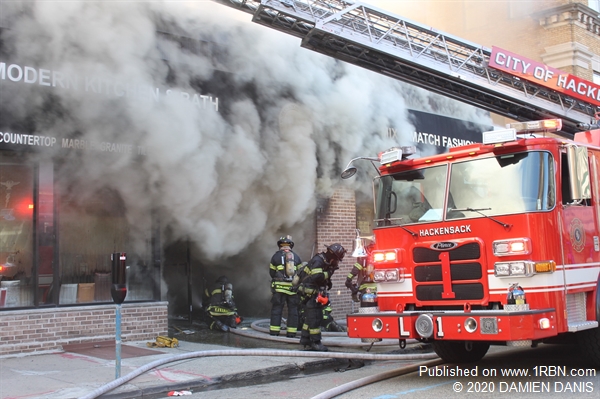 Photo by DAMIEN DANISHackensack firefighters in front of building with heavy smoke. 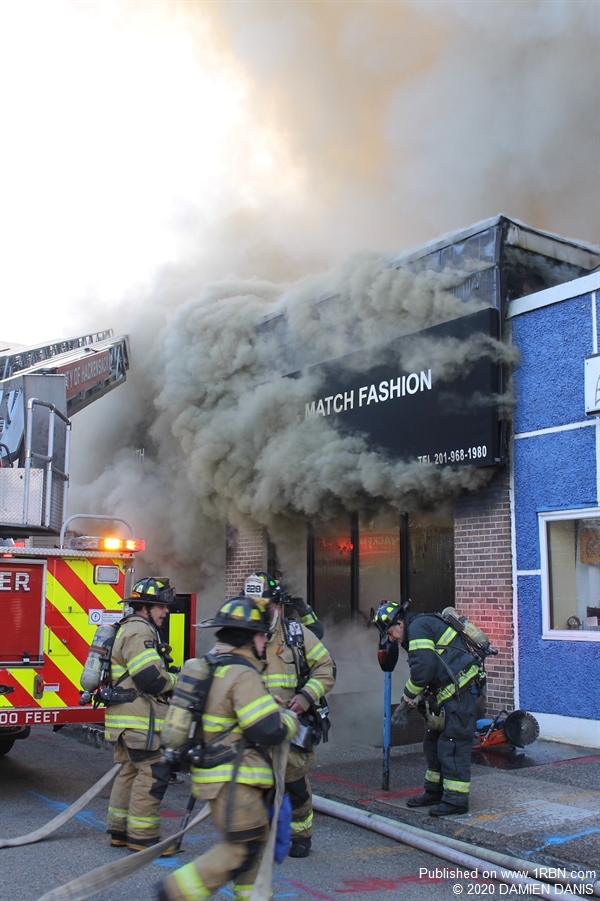 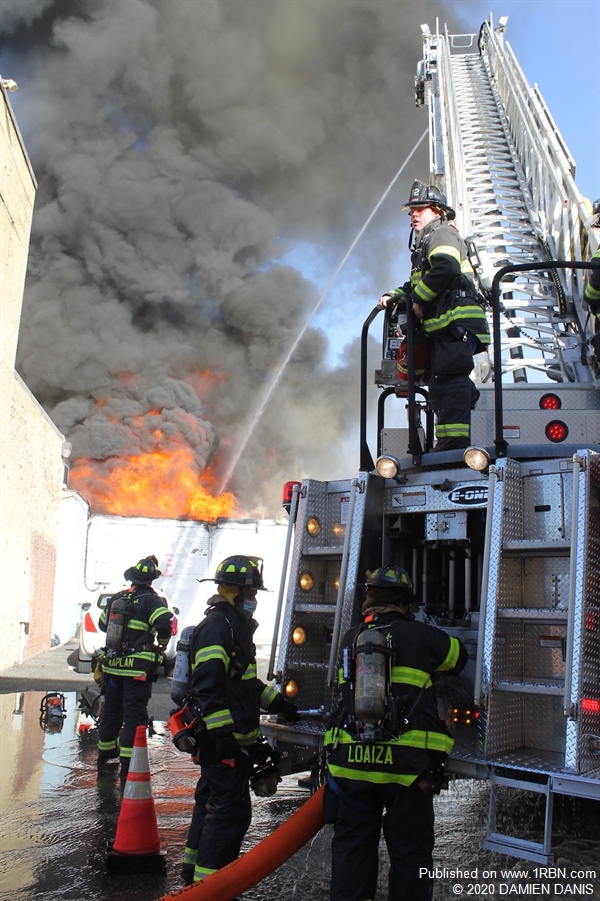 Photo by DAMIEN DANISEnglewood firefighters set up their tower ladder in the rear as heavy fire vents. 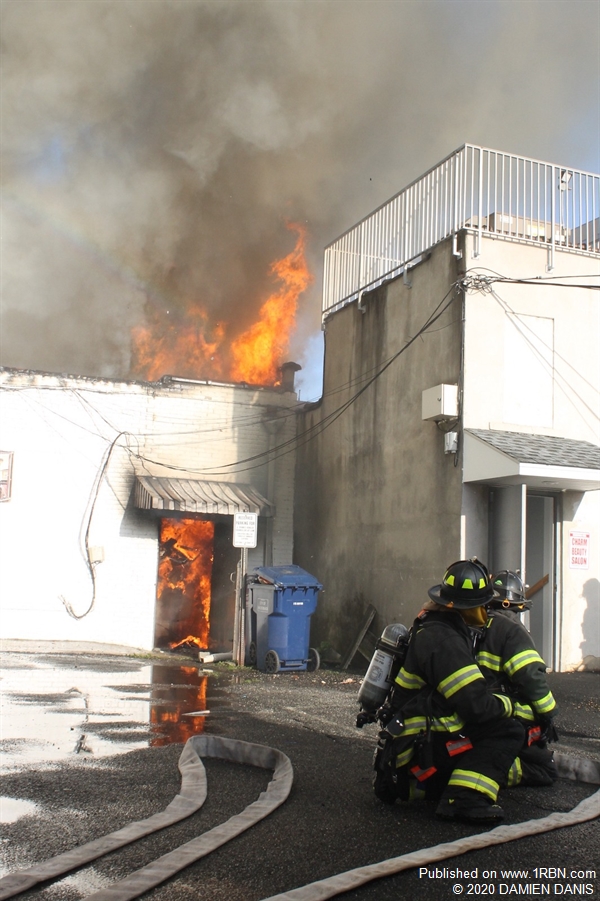 Hackensack, NJ - As city fire companies were busy responding to separate alarms, a major fire broke out in a one-story commercial building at 227 Main Street, at approximately 5:45 P.M., May 16th. As a matter of fact, several fire companies, responding to other alarms, smelled smoke in this Main Street area as they went by.

An engine, followed by other units, became available when police reported a fire at 227 Main St. and took the run in. Firefighters were greeted with heavy smoke pushing from the structure, which contained NJ Modern Kitchen & Bath and Mix & Match Fashion.

A huge column of black smoke rose into the sky, visible in Manhattan, as firefighters lined in. Members cut several holes in the roof, and flames vented out of same. They were quickly removed from the structure as flames broke through the front, back, as well as through the roof. Outside lines and master streams were set up as a recall for off duty personnel and mutual aid companies were called to the scene by Deputy Chief John Taylor.

Mutual aid units that answered the alarms responded to the scene from Englewood, Teaneck, Ridgefield Park and Bogota. Ladder pipes were set up on Main Street by Hackensack Ladder's 1 and 2, and Englewood Truck 1 used their tower ladder in a rear lot.

Despite the heavy volume of fire, firefighters began to make progress, as the column in the sky began to turn to a gray color. Flames burned through the roof, which later collapsed and a portion of the front facade fell onto the sidewalk.

The HFD reported that one firefighter was treated at a local hospital for minor injuries and released. In addition, the multiple alarm was being investigated by the Hackensack Fire Prevention Bureau and members of the Bergen County Prosecutor's Office Arson Squad. This is a standard practice when there is a substantial fire loss.

The Teaneck Box 54 Club set up a rehab station, behind the department command post, to assist the worn out firefighters on this warm evening.