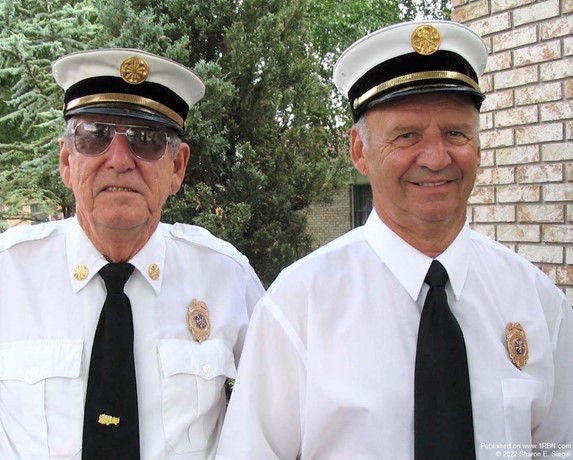 Photo by Sharon E. SiegelPast Chief Robert Dunn pictured during his many years of service to Port Jervis FD. 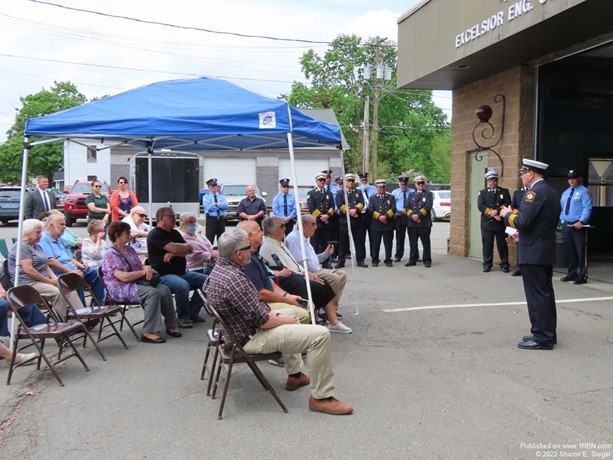 Photo by Sharon E. SiegelPort Jervis Fire Department Deputy Chief James Rohner praised the impact of Past Chief Robert Dunn on his own firefighting skills and service. Pictured in the front row is Dunn's wife Nancy and sons Bruce and Brian. 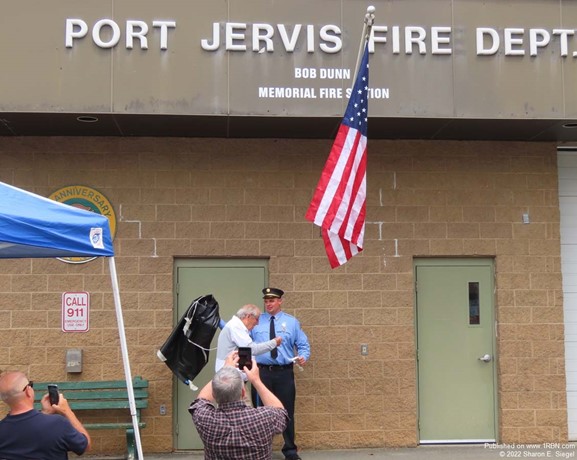 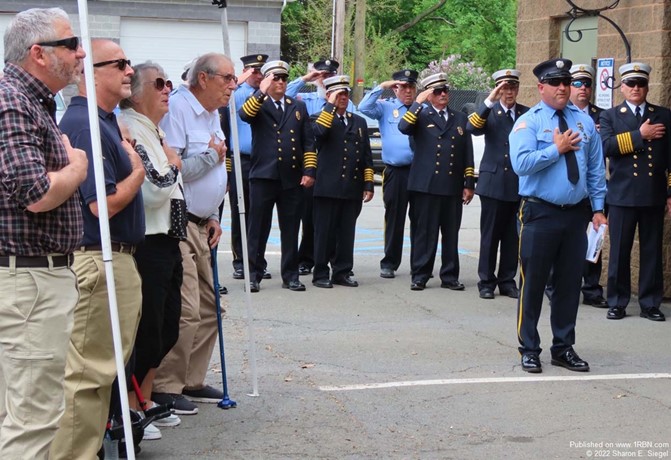 Photo by Sharon E. SiegelSurrounded by many of the officers, chiefs, and past chiefs of Port Jervis, and Bruce, Brian, and Nancy Dunn, Fire Department Excelsior Engine Co. No. 5 President Jason Vicchiarriello leads the Pledge of Allegiance during May's ceremony naming Bob Dunn Memorial Fire Station. 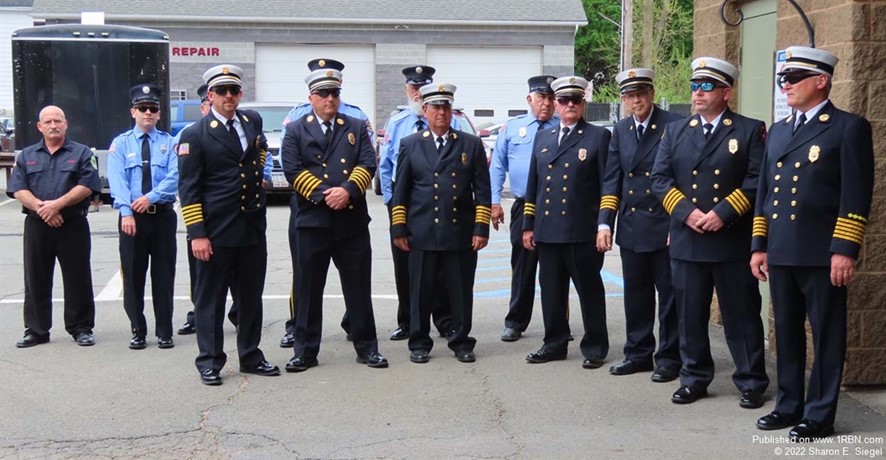 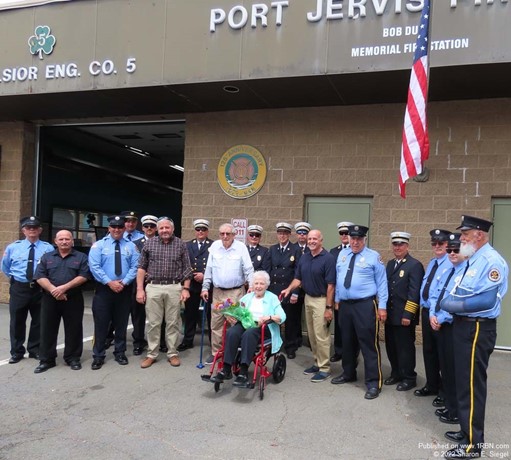 Photo by Sharon E. SiegelPort Jervis FD chiefs, past chiefs, and members of Excelsior Engine Co. No. 5 are pictured with the family of Past Chief Robert Dunn, who was honored and remembered in a special May 14th ceremony naming his longtime company firehouse the Bob Dunn Memorial Fire Station.

PORT JERVIS, NY – A beloved Past Chief of the Port Jervis Fire Department was remembered in a special way on Saturday, May 14th, as a fire station in the city was dedicated in his memory and honor. Robert B. Dunn, who spent much of his life in the volunteer firefighting service, passed away on September 27, 2021. His decades of dedication were recalled in remarks and memories shared by fellow firefighters and others.

Current and past chiefs, officers, members of the department, city officials, family members and friends of the Dunn Family, neighbors and general public gathered for the special dedication ceremony at Dunn’s longtime firehouse. Excelsior Engine Company #5 President Jason Vicchiarriello praised the service that prompted his company’s naming of their firehouse as Bob Dunn Memorial Fire Station. Vicchiarriello said the idea to name the fire station in Dunn’s memory came about during a company meeting, as members expressed the desire to pay tribute and honor Past Chief Dunn.

Vicchiarriello recalled Dunn's active membership in Port’s fire department for most of his life.

Born on April 25, 1934, Dunn grew up in the city’s West End and lived in that section of the city for all of his life. He was voted into the department and into West End’s Excelsior Engine Co. on May 18, 1955, just weeks after his 21st birthday. Over 67-years with the department, he held the rank of Second Lieutenant, First Lieutenant, and in 1964 Captain of his company. He went on to become 2nd Assistant Chief from 1972-1975 under Chief Donald DeVore, 1st Assistant Chief from 1976-1979 under Chief Charles Baumgardner, and himself Chief of the Department from 1980-1983.

Port Jervis Mayor Kelly Decker and other members of Port’s Common Council were in attendance as a proclamation delivered by Decker named May 14, 2022 “Robert B. Dunn Day” in the City of Port Jervis.

Both Decker and Vicchiarriello recalled Dunn’s service in many other ways, including with the U.S. Army during the Cold War, to his church, Most Sacred Heart Church, and his love for his family, including his wife of 63-years, Nancy, and sons Bruce and Brian, all of whom attended the ceremony.

(Author's note): the actual larger letters spelling the newly named station were delayed, but expected to be delivered this month. They will replace the pictured smaller letters that were temporarily placed for the May 14th event.