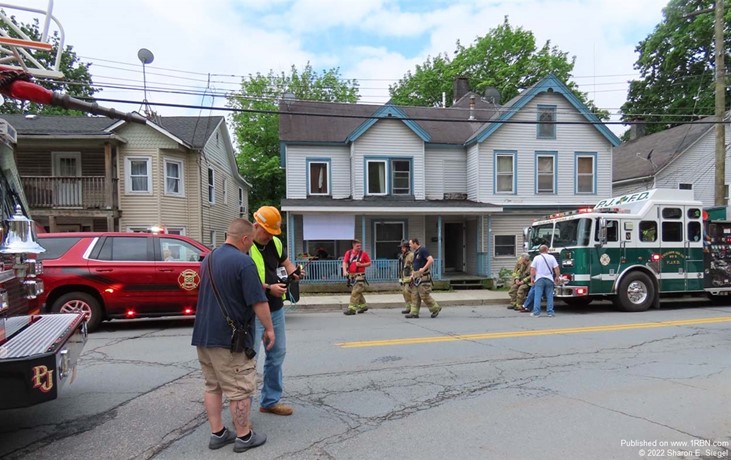 Photo by Sharon E. SiegelPort Jervis Fire Department awaits the arrival of Orange and Rockland Utilities responders to a gas emergency situation that PJFD had secured on Sunday, May 15.

PORT JERVIS, NY - Port Jervis Fire Department closed a small section of the city’s west end after responding to a gas leak in a home on that residential block, Sunday, May 15th. The house is situated alongside the little league ball field, and across from Excelsior Engine Co. 5 and the PJFD Fire Police.

While the department periodically responds to reported smells of gas or minor gas incidents, using block outs, the incidents typically do not cause much of an issue. In this case, precaution was immediately taken upon investigating the situation and cause.

PJFD 1st Assistant Chief Anthony Fuller said the gas leak was found to be coming from a major gas line break at the home. A pipe had broken at the union of a new boiler which had been installed in the house.

Responders were able to terminate the gas at the meter and ventilate the house. They then stood by on scene to wait for Orange and Rockland to arrive and take the next step in repairing the break.

The area was temporarily blocked off from Grand View Avenue across the railroad bridge to Ferry Street.