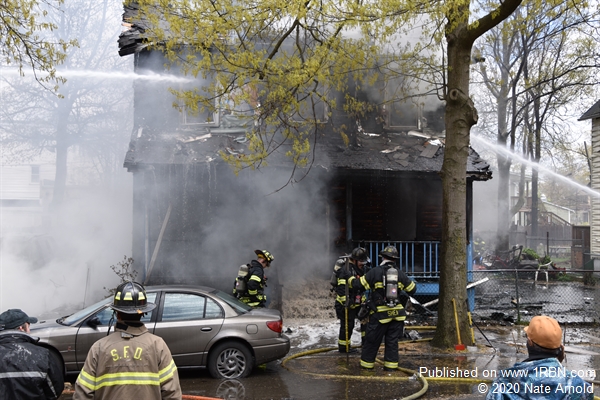 Photo by Nate Arnold Master streams darken down the last of the fire on Terrance Street. 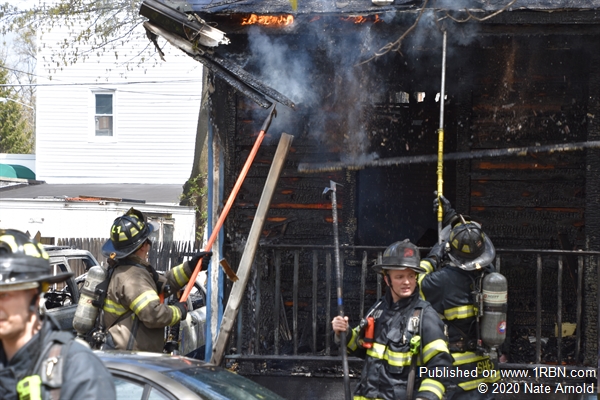 Springfield, MA - A fast-moving fire destroyed a two-story home and five vehicles, and damaged two other homes in the Old Hill section of Springfield on the afternoon of Saturday, May 9th. The blaze required two alarms worth of companies to knock down.

Members of Engine Co. 8, Truck Co. 2 and the Rescue Squad were enjoying a brief moment of peace and calm in their firehouse on Eastern Avenue, nicknamed "Springfield's Fire Factory" for their heavy workload, when an excited neighborhood resident ran for the front door of the station. Gaining the attention of the man on watch, the resident indicated there was a fire on Terrance Street, three blocks from their current location, and as the bay doors rolled up, the members were greeted with a large column of black smoke visible from the front ramp.

After a short response, crews found an occupied two-story frame dwelling on Terrance Street fully involved along with five cars and trucks parked around the building. To make matters worse, a strong wind was fanning the flames and radiant heat was attacking both the 'Bravo' and 'Delta' side exposure buildings, as well as spreading embers to neighboring streets.

Chief 2, DFC Marcellin, struck a second-alarm when advised of the conditions on scene by Engine 8 and second-alarm companies were split between two streets so as to surround and drown the fire.

With hand lines and ladder pipes surrounding the fire ground, companies brought the fire under control within 20 minutes. The damage to the property however was significant. The original fire building was a total loss, along with five vehicles and exposure buildings sustaining several thousand dollars worth of damage.

Two residents were left homeless by the fire. The cause remains under investigation.