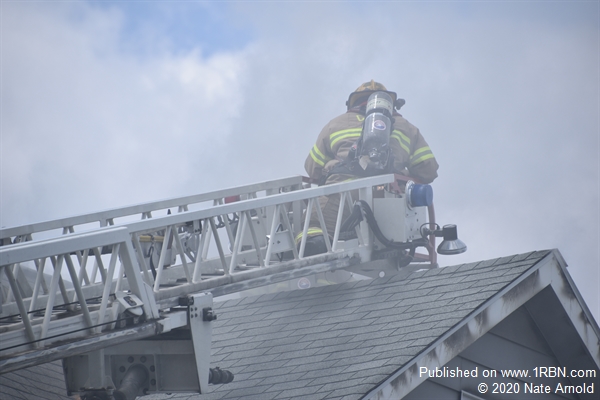 Photo by Nate Arnold Ladder Co. 5 heads to the roof to open up on Edward St. 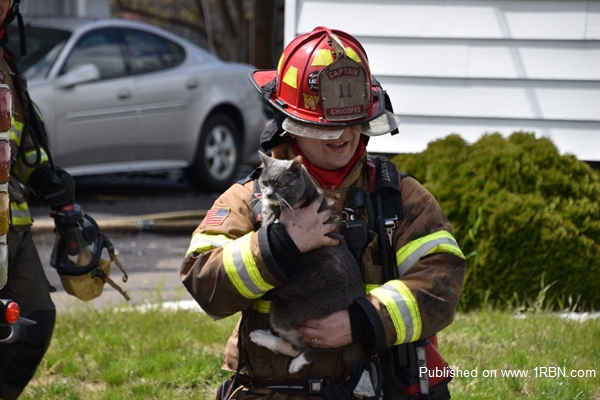 Capt. Jerusik brings one of the fraught felines out of the fire building.

A fire that was fanned by sustained wind gusts heavily damaged a multi-family home in the Aldenville neighborhood of Chicopee early in the afternoon of May 12, 2020 forcing several residents to evacuate the building.
911 calls came into WESTCOMM Public Safety Dispatch at 12:40 p.m. reporting the fire on Edward Street and, as luck would have, first due Engine Co. 7 whose firehouse is 2 blocks from the scene was in the process of annual pressure testing of their allotment of fire hose. The crew from 7 abandoned their hose testing, leaving several lengths of LDH charged on the ramp of the firehouse to respond to the fire. Arriving on scene, 7 was presented with heavy fire on the Charlie side of the two and half story dwelling. As the rest of the first alarm assignment arrived on scene, companies stretched three hand lines to the rear and interior of the structure and began an arduous fire fight. With fire now in the walls and attic of the building, Edward Street command ordered a second alarm be struck bringing two more engines and another ladder to the scene and mutual aid into the city to back fill.
Companies spent the better part of the next two hours chasing hidden pockets of fire. During this time, distraught residents wondered if their two pet cats were alive and well. A small consolation came to the residents when CFD firefighters were able to locate both animals, alive but scared and return them to their owners' possession.
The cause of the fire remains under investigation.