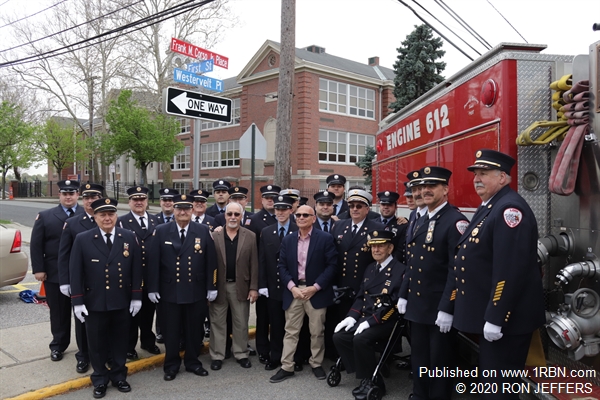 Photo by RON JEFFERSLodi ex-Chief Corso, seated, with his fellow firefighters and borough officials, during the 2019 ceremony at "Frank M. Corso Jr. Place."

On April 28th, 2019, borough officials and firefighters got together and named the street in front of Company 1's quarters, Frank M. Corso, Jr. Place.

Following in his father's footsteps, Corso joined the Fire Department in 1948. Before that in 1943, he enlisted in the U.S. Marne Corps and served in the South Pacific during World War II and the Battle of Okinawa.

He was a professional carpenter and a construction superintendent. After he retired from his construction work, he started a new career as a borough fire inspector.

Chief Corso was named “Fireman of the Year” in 1987. His other accomplishments included being president of the Lodi Exempt Firemen's Association, South Bergen Fire Chief's Association, and he served as department chaplain for 38-years. In addition, he was the leader of the annual Memorial Day services for 20-years.

His dedication and love for the Fire Department and the Borough was evident on that April day when many firefighters, from all companies, local officials, family and friends turned out for the street naming ceremony.