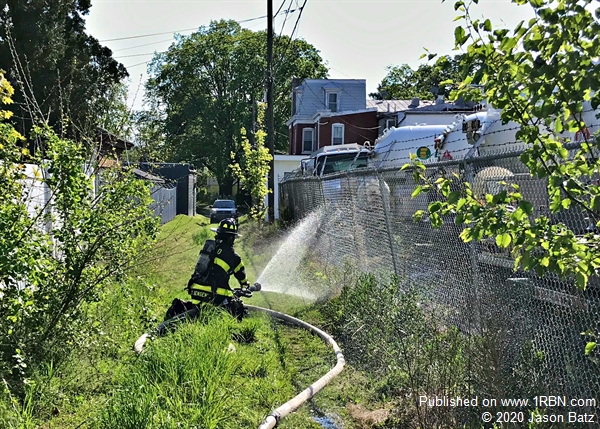 Photo by Jason BatzReading Firefighters responded to a propane storage facility when local residents reported a gas odor and observed a cloud in the area. Crews stretched a hose line and used the water to disperse the vapors.

Photo by Jason BatzWorking with the direction of facility personnel, firefighters apply water to this propane truck after it began leaking the flammable gas during the afternoon of May 3rd.

Reading, PA - On Sunday, May 3rd firefighters from the "A" platoon were alerted at 3:25 P.M. for a gas leak in the area of Carbon Street and Blair Avenue. Engine 7 arrived in the area with a distinct odor and vapor cloud visible from a propane sales and storage facility. Deputy Chief Rehr (Car 8) arrived and ordered companies to establish a water supply and stretch a 2½" hose line. An additional engine company was also requested for assistance. Crews located the leak from the rear of a propane delivery truck. With light winds in the region, the propane was dissipating into the surrounding area. Residents in the homes to the south of the leak were evacuated as a precautionary measure. A representative from the company arrived and confirmed the leak to be from a damaged tank connection and began to make arrangements to pump the remaining product to another truck. The truck involved was at 90% of 3,499 gallons. As company personnel prepared to offload the propane firefighters flowed water to assist in vapor dispersal. The assignment remained on scene for 3 hours. No injuries were reported.