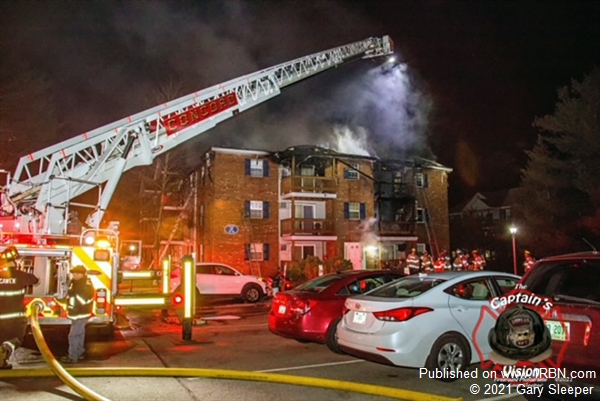 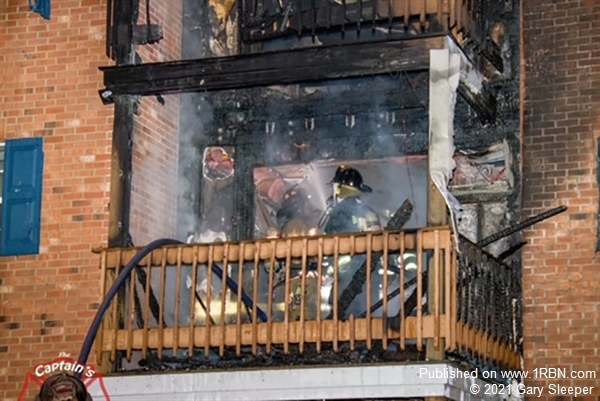 Photo by Gary SleeperHeavy damage was sustained through out the building.

Concord Fire Alarm received a fire alarm activation for the Pinewood Village Apartments at 11:39 P.M., followed by multiple calls for a fire in Building 2. First due Engine 5 and Ambulance 5 arrived on scene of the 24-unit apartment building to find heavy fire showing from the second floor, third floor and attic. Companies quickly went to work to evacuate the building and attack the fire. Several pets were rescued by firefighters.

A second-alarm was transmitted, bringing in mutual aid from several departments. As firefighters completed their primary searches on all three floors, they withdrew from the building as heavy fire extended through the roof. Concord's Tower Ladder and deck gun knocked down the heavy fire conditions so firefighters could reenter to extinguish pockets of fire and overhaul.

One occupant was transported to the hospital and two firefighters were injured battling the blaze. One was treated for second degree burns and one firefighter injured his knee. Due to the amount of damage to the building, none of the units were able to be reoccupied. The fire remains under investigation by the Concord Fire Department and NH State Fire Marshal's Office.