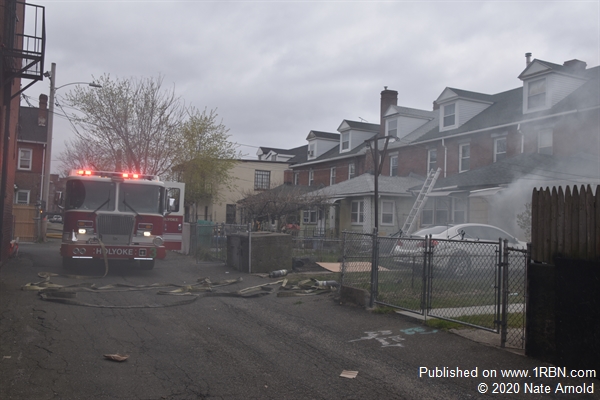 Photo by Nate Arnold Engine 3's pump has a dry line stretched in the alleyway behind 50 North Canal.

Holyoke, MA - A basement fire extended up into the first floor rear of an occupied, middle of row town home in Holyoke, displacing several residents shortly after 11:30 A.M. on Tuesday, April 21st.

Responding Holyoke firefighters found fire burning in a crawl space in the basement of the town home and working its way up into the walls of a wood-frame, single-story addition on the 'Charlie' side that housed the unit's kitchen. Firefighters coordinated their efforts, stretching lines to the basement and first floor, as well as conducting horizontal ventilation strategically in an effort to minimize property damage but get ahead of the fire as quickly as possible.

The main body of fire was knocked down quickly, but also required extensive overhaul of the basement and the kitchen, keeping three engines and one truck company busy for over an hour and a half.

A man and his son were home at the time of the fire, but safely evacuated the home prior to the fire departments' arrival. A total of four people were being assisted by the Red Cross. The cause of the fire is under investigation.