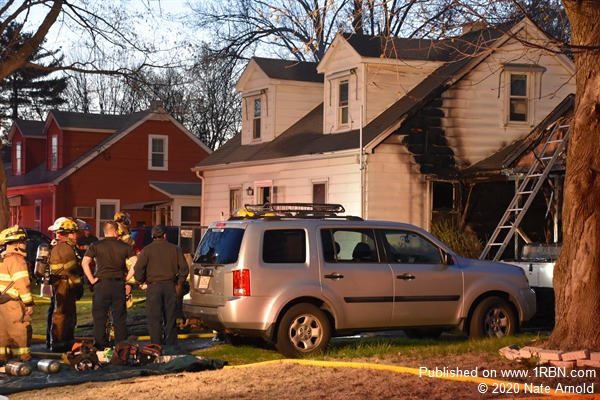 Photo by Nate Arnold Crews take a breather outside of 172 Chapel St.

An intense fire damaged a home in the Aldenville neighborhood of Chicopee just as the owner, a nurse, was returning from her latest shift at a local hospital on the front lines of the Covid-19 pandemic.
Chicopee crews responded to the distraught home owners call for help shortly after 7:15 p.m. The war weary nurse had arrived home to find the right side of her two story Cape Cod style single family dwelling involved in fire and was the first to call 911. Crews found the attached breezeway and carport well involved, reportedly seeing heavy fire above the tree line as they pulled onto the street. First due Engine Co. 7, who had been reopened only a few short months ago after being closed due to budget cuts and staffing issues for over 10 years, deployed a large caliber hand line from their apparatus to attack the main body of fire. A second alarm was struck as a precaution and mutual aid from Westover Air Reserve Base Crash/Fire/Rescue responded to cover the city along with the lone CFD engine that did not respond to the scene.
On scene, the fire was knocked down within 15 minutes of arrival but the home sustained terrific damage. The cause of the fire remains under investigation by the CFD and the State Fire Marshal's Office.