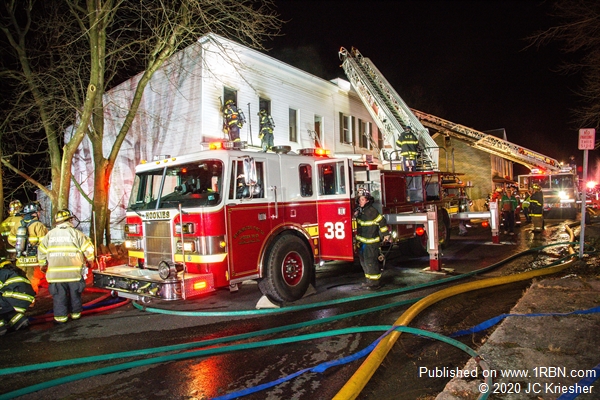 Photo by JC KriesherLadder 38-25 has the roof for a fire in a vacant dwelling on Market Street in Ashland. The fire was under control in roughly 15 minutes.

SCHUYLKILL COUNTY, Pa. – At 8:55 PM on Wednesday, March 18, Schuylkill County 9-1-1 dispatched a first alarm assignment for a house fire at 1016 Market Street in Ashland. Fire District 38 (Ashland) and 45 (Girardville) were due on the box.

Chief 38 arrived on the scene to find a two story end-of-the-row dwelling with smoke showing from the second floor. Chief 38 called it a working fire and asked for the second alarm.

Truck 2 came in behind 38-25 and both ladders were set to the roof. Englewood set up a Rapid Intervention Team at the A/B corner.

Multiple lines were stretched into the building and quickly knocked the fire down. Ventilation was performed on the second floor and cleared the smoke and steam out within 20 minutes.

The fire was placed under control at the 20 minute PAR check and units began to be released before 10 PM. All units were clear of the scene by 10:45 PM.