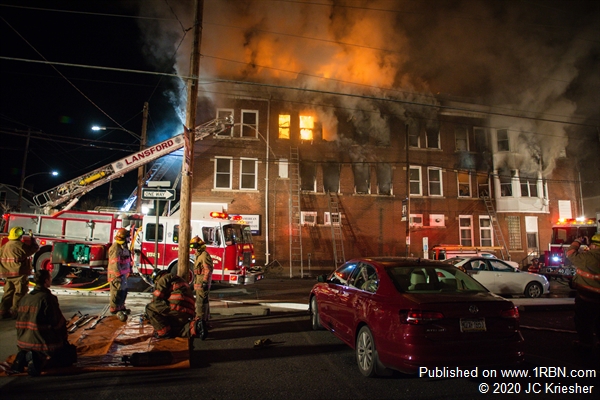 Photo by JC KriesherFire rips through the upper floors of an apartment building in Lansford. The fire required three alarms to respond to the scene. 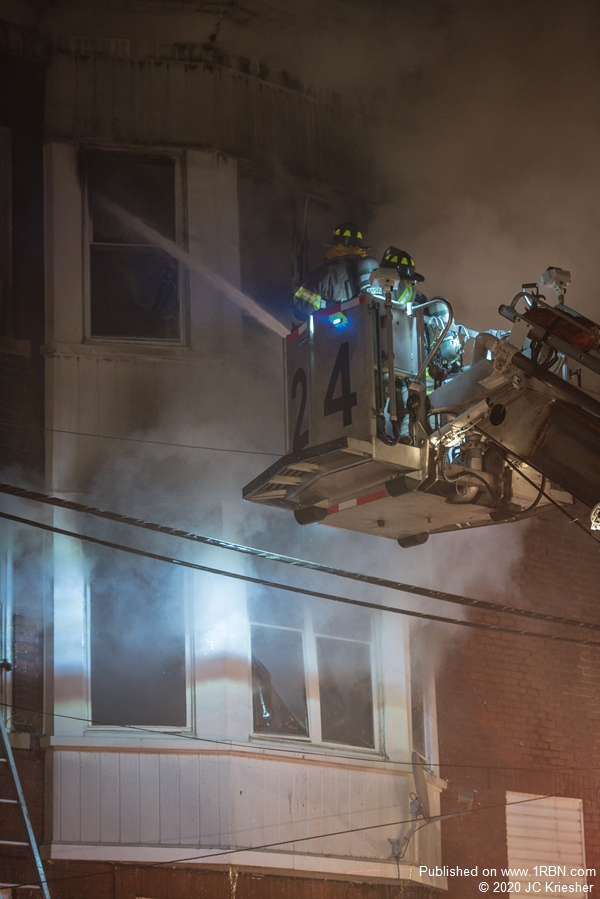 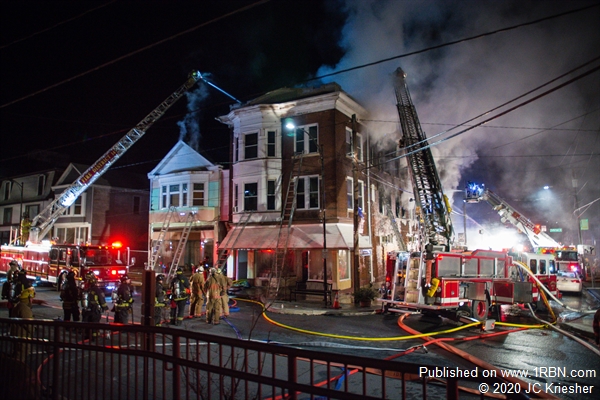 CARBON COUNTY, Pa. – Around 4:15 AM on Thursday, March 12, Carbon County 9-1-1 transmitted a first alarm for a building fire in the unit block of East Ridge Street in Lansford.

Police radioed a report of a working apartment building fire across from their police station. Police had fire showing from the second floor which was rapidly growing.

First arriving units had heavy fire venting from multiple second floor windows on the “D” side of a three story brick building with an attached exposure on the “B” side.

Ladder 1521 took the A/D corner and would eventually have all lines pulled off the bed. Rescue 1552 set up near the ladder and secured a water supply from a long lay of LDH. Summit Hill Lader 1421 and Engine 1411 positioned at the A/B corner while Coaldales Tower 40-24 and Engine 40-17 took the C/D corner.

A second alarm and subsequently a third alarm was struck for the fire that was moving throughout the entire building. All firefighters were pulled out of the building as the fire had overtaken most of the building. Exterior operations were initiated.

Nesquehoning Ladder 1321 backed into a driveway on the “B” side and was able to set their aerial up while their engine secured an additional water supply.

Tamaqua Fire Department set up a Rapid Intervention Team on the “A” side and was assisted by a second RIT from Weatherly. EMS from Lehighton and Mahoning Valley were on stand-by at the scene and set up rehab.

The bulk of the fire was knocked down in about an hour and a half using exterior lines and ladder pipes but crews would remain on scene well into the morning working on complete extinguishment.

Units from Tuscarora and Mahoning Valley also assisted at the scene. A Ladder from Mahanoy City and Engine from Ringtown Valley moved up to Coaldale’s station and handled an oil burner malfunction.