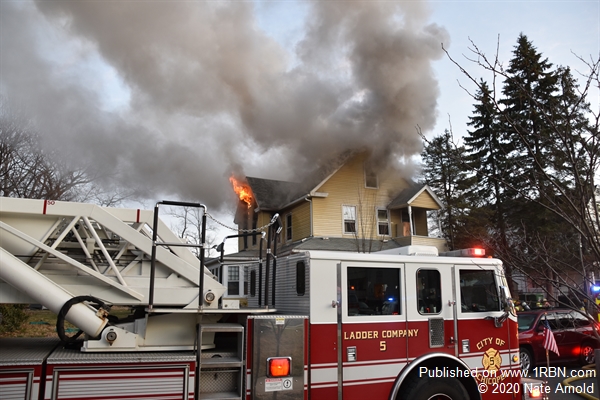 Photo by Nate Arnold Fire vents from the 'Bravo' side dormer at 78 Skeele St. 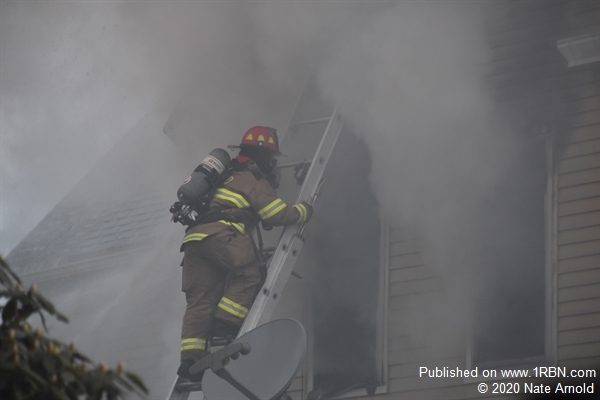 Chicopee, MA - An early morning fire on April 1st in the Willimansett neighborhood of the City of Chicopee required nearly every on duty firefighter to respond and gave the members a great deal of difficulty in extinguishing it after it took possession of the void spaces and the attic.

The call came in shortly before 6:00 A.M. for a reported structure fire at 78 Skeele St., and first arriving fire crews found heavy smoke venting from one side of the dwelling. To make matters worse, there were initial unconfirmed reports that one resident of the building may still be inside.

Companies broke into suppression and search groups with command first requesting extra companies to respond above the first-alarm and then ordering the striking of a full second-alarm. Just as crews were beginning a primary search, it was determined that the occupant first thought trapped was, in fact, at work and not on the property at all.

All companies then switched to an interior attack on the fire, but the flames had already communicated to the void spaces in the walls and was heading for the attic. Crews fought hard to try and gain an upper hand, but were driven out by deteriorating conditions and forced into a defensive attack. The CFD spent the next hour-and-a-half in a surround-and-drown operation before the fire was declared under control and second-alarm companies began to pick up.

The Springfield, Holyoke and Westover Air Reserve Base Fire Departments covered the city during the height of the fire. One occupant was taken to the hospital as a result of the fire.