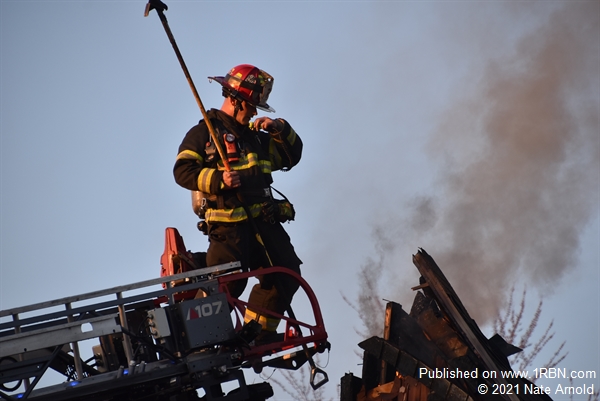 Photo by Nate Arnold Truck 2 Lt. Dan Allard radios in a progress report from the tip of his aerial as a hot spot burns on the 'A' side of Woodlawn St. 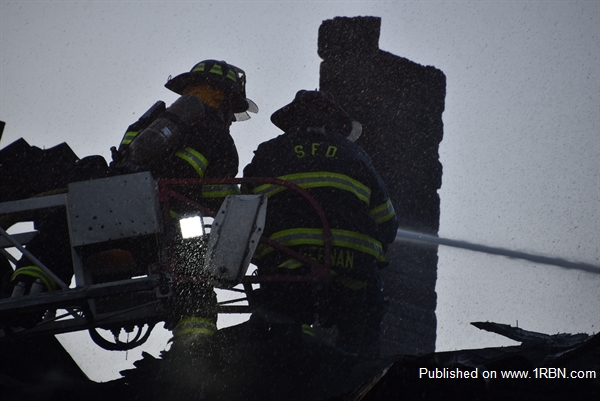 SPRINGFIELD, MA - A late afternoon fire displaced seven residents and burned the roof off of an occupied two-and-a-half story wood-frame dwelling in the East Forest Park neighborhood of Springfield on March 19th at 6:00 P.M.

Springfield firefighters arrived to find heavy smoke and fire venting from the second floor and attic on two sides of the home and made a terrific push into the building in an effort to bring the fire under control quickly. Conditions inside the home deteriorated rapidly however, and Woodlawn Command was forced to pull all members out of the building and switch to a defensive attack as six-foot flame tongues blew out of the windows on the second floor at one point.

Two ladder pipes, hand lines and apparatus mounted deck guns played into the building for nearly 30 minutes before the main body of fire was knocked down. With the fire burning away most of the roof structure of the home, SFD members were forced to tear down what remained due to the collapse hazard the unstable portions posed.

At the time this article was written, the cause of the fire was still under investigation by the SFD Arson Squad, though it is believed by investigators that the fire started somewhere on the second floor.