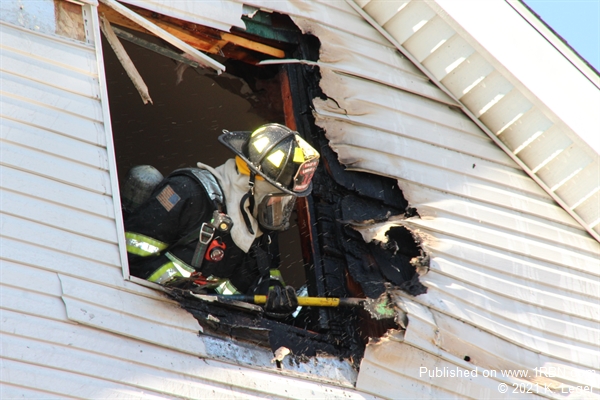 Photo by K. LegerA firefighter overhauls the exterior of the window frame.

FALL RIVER, MA - Around 10:30 A.M. on Monday, March 15th, firefighters responded to 645 Rodman Street for a reported still alarm. Engines 2, 4, 9, Ladders 2 and 4, Rescue 1 and Car 2 responded. Car 2 arrived on scene and reported smoke coming from the top floor and eaves. Police Officers had evacuated the building prior to the arrival of the first fire apparatus on scene so members went right to work stretching attack lines to the fire floor. Crews found fire in the walls on the 'A' side of the building and quickly extinguished the flames and began overhaul. Command called for a fire investigator and a building inspector to respond to the scene.