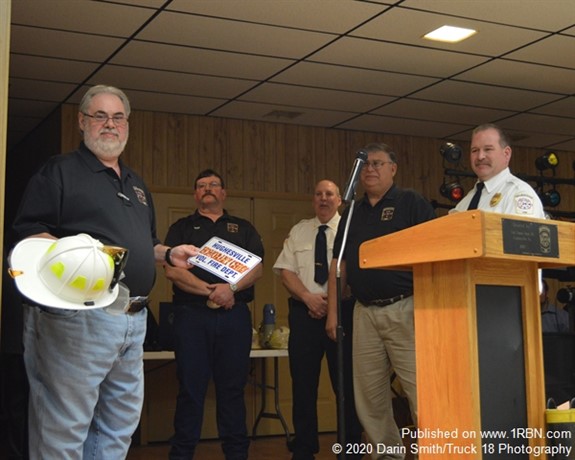 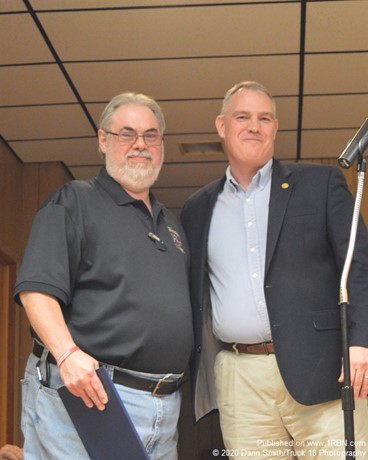 Photo by Darin Smith/Truck 18 PhotographyHonorary Chief Stiger being presented a Proclamation from the State House of Representatives, by Charley Hall, of the 84th Legislative District. 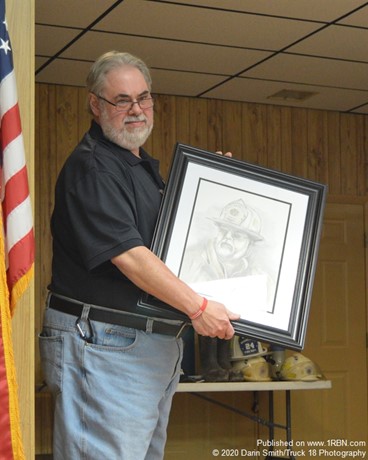 Photo by Darin Smith/Truck 18 PhotographyChief Stiger with a drawing of himself, presented by his Aunt Alice Jean Andrews. 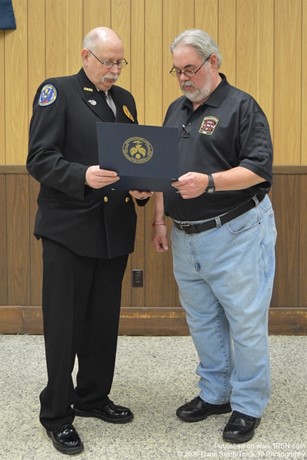 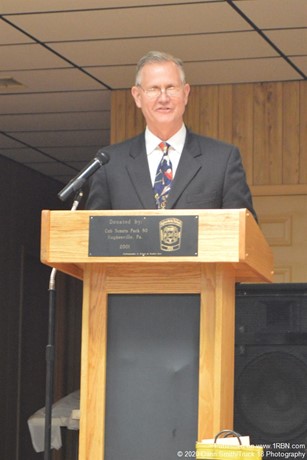 Photo by Darin Smith/Truck 18 PhotographyJudge Jon Kemp commenting on "Stumps" career and their friendship growing up together. 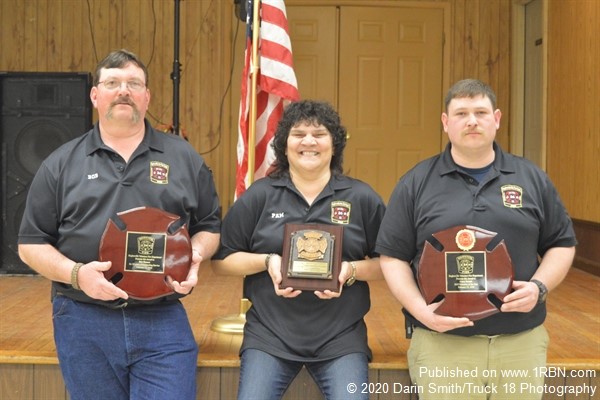 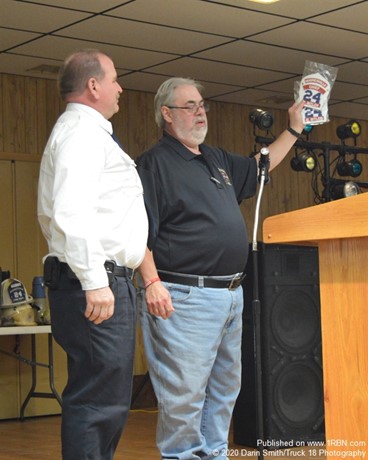 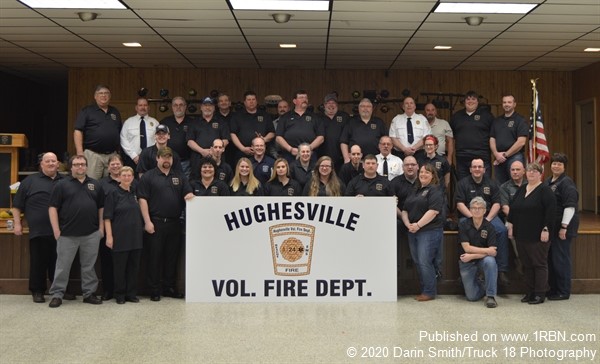 Photo by Darin Smith/Truck 18 PhotographyGroup photo of all the active members at the banquet, with a new sign presented by the Fire Department Auxiliary.

February 22nd, the Hughesville Volunteer Fire Department held its annual members banquet. But this year would be slightly different, as it would be honoring its outgoing chief of 28 years.
The evening was started with a social hour, as members and guests arrived at the department social hall. Neal Winder, company president, welcomed the members and guests, and introduced Pastor Dan Cale of The Friends Church, in Hughesville, who gave the invocation. An excellent and very filling meal and deserts were prepared by the Turbotville Hotel. After the meal was finished, the keynote speaker was introduced. Pennsylvania State Fire Commissioner Bruce Trego spoke of his joining and rise through the fire service, up to his appointment as Fire Commissioner. He also spoke of the current issues facing the emergency services, with declining memberships, cancer awareness and emergency responders mental health.
President Neal Winder introduced area fire chiefs and municipal government guests, and turned the floor over to Fire Chief Rusty Bitler. Chief Bitler thanked all of the members and guests for coming to the banquet to honor our members. The 3 chiefs proceeded to present awards to the members. Numerous members were presented with years of service awards, including Assistant Chief Chris May, for 40 years of service. Casey Swank received the Volunteer of the Year award. Assistant Chief Dan Dorman was awarded the EMS Responder of the Year. The Kline DeWire award for training was given to Pam Kinney, for her many hours of fire prevention and training children, students and adults in fire safety and fire prevention. At the conclusion of the awards presentation, the group moved to the opposite end of the social hall, where some additional invited guests were awaiting the tribute to the retiring chief.
Financial Secretary Scott Aderhold opened the tribute with a small history of the volunteer career of Chief Steve “Stump” Stiger. Stump joined the Lairdsville Fire Company as a junior member, over 40 years ago, since at that time Hughesville did not have a junior program. As soon as he was of age he joined the Hughesville Volunteer Fire Dept. He was fortunate to have some very good mentors in the department, who saw his potential and eagerness to learn as much as he could. He never missed a chance to help with fund raising, training or any other chore that was needed around the fire house. He rose through the ranks, holding every line officer position along with vice president and president of the fire company. Scott turned over the podium to the Honorable Judge Jon Kemp. Jon and Stump grew up together, and spent a lot of time together at the fire dept., which of course may have led to some shenanigans around the fire house. Jon went on to become the Chief of the Williamsport Fire Dept., and after retiring was elected District Judge.
Fire Chief Rusty Bitler was introduced as the new chief of the department, and immediately admitted that he had a tough act to follow. He spoke of their friendship and learning from Stump over his years as assistant chief. The microphone was taken around the floor for comments from the audience, which many of the surrounding fire chiefs toasted, and commented on Stumps friendship, and helpfulness over the years, including some mischievous pranks, and fun. The podium was turned over to Charley Hall, District Office Manager, 84th Legislative District, as Garth Everett had a prior obligation. Charley Hall presented a proclamation from the State House of Representatives, acknowledging his dedication and length of service to the department.
Then several of the officers of the department presented Steve with a new white New Yorker helmet and license plate proclaiming Honorary Chief. This position was officially created in the departments by laws Because of his extended service to the fire department.
The stage was turned over to Chief Stiger’s Aunt Alice Jean Andrews who presented him with a framed drawing of him in his coat and helmet. It was then Steve’s turn to take the stage. Thanking all of his mentors, the department and most especially his wife, Sue Stiger and family for all of their understanding throughout the years of his racing out of the house at the drop of the tones. His mother Betty was one of his biggest role models as she is still a volunteer in the department auxiliary along with volunteering at the neighboring Picture Rocks Fire Company for fund raisers. Stump then presented Chief Bitler with 2 new Chief 24 front pieces for his helmet. After the formal tribute, PA State Fire Commissioner Bruce Trego presented Stump with a Certificate of Appreciation from the Office of the State Fire Commissioner.
Throughout Chief Stiger’s 28 years as Chief of the Department, he helped lead a complete replacement of all apparatus in the station. Replacing the ambulance 3 times, placing into service an ATV, and replacing it with a newer model, and finished off his career with the ordering of a new Brush and Utility trucks. But possibly one of the biggest accomplishments during his time as chief was the replacement of the fire station with a modern state of the art station. But this is not a good bye to the department; Steve will still be around as time permits, as a safety officer and mentor to the future generation of fire officers.