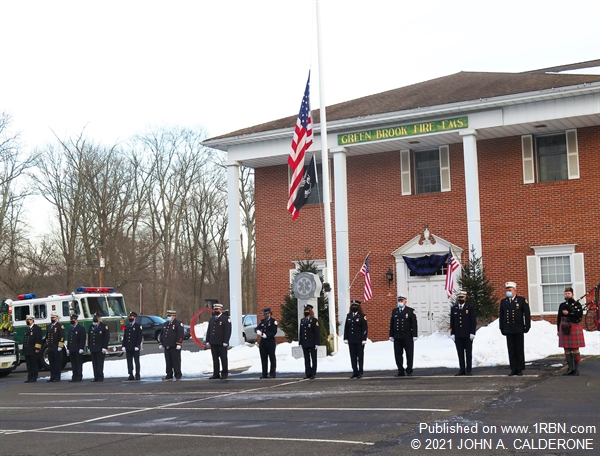 Photo by JOHN A. CALDERONEGreen Brook firefighters lined up in front of Fire Headquarters on the day of Jack de Rosset's funeral to honor his memory. 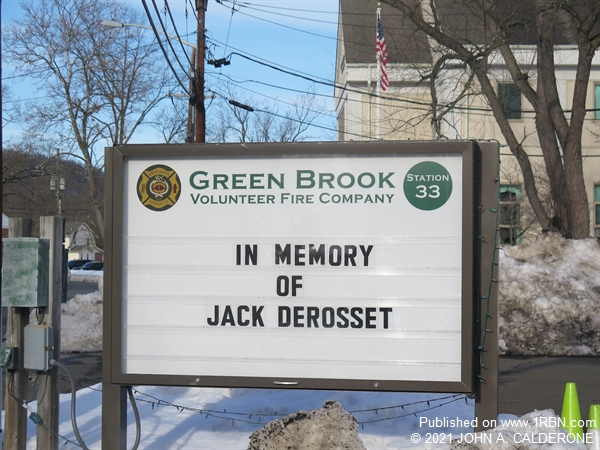 He loved every aspect of the fire service. He was a volunteer firefighter, apparatus salesman, organized firematic flea markets and was co-owner of a store that features model railroad and fire apparatus items. In January, Jack de Rosset died after battling COVID-19.

Jack started out as a junior firefighter with the Green Brook V.F.D. while he was still in high school. He served as an active member for 35-years, and was a member of the Green Brook Exempt Firemen's Association.

He had a passion for fire apparatus. He collected apparatus models, photographs, and he would go on trips to photograph apparatus, himself. In addition, during his years he was a fire apparatus salesman for companies including General, HME, Smeal, Central, Toyne and Rosenbauer.

Green Brook was well known by firefighters and firematic collectors. Green Brook firefighters were the host of an annual firematic flea market in November, before the days of eBay. Organization leaders included Jack, who ran around with a clipboard making sure vendors got their correct tables and seeing that things were running properly. In the 1980's, the firehouse meeting hall was packed with people looking for that certain toy, helmet, apparatus parts, photos, tee shirt, and much more. It was a November reunion for many firefighters and collectors, knowing that this was the last meeting event before winter. It became so popular, that the vendor tables extended to the apparatus floor, downstairs.

Jack was also named an associate member of the New Jersey Metro Fire Photographers Association, for his loyal support of the group.

He is survived by his wife, Rita.

Another great contributor to the fire service will be long missed.