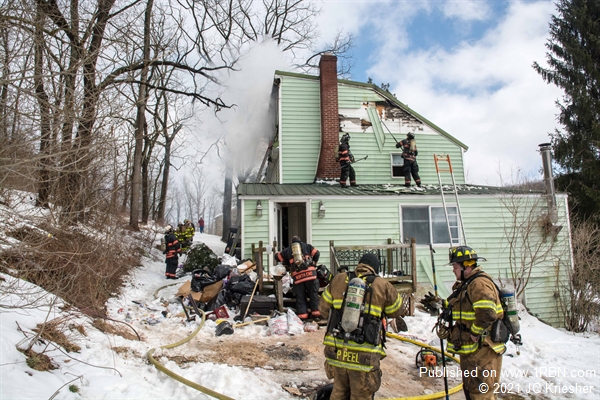 Photo by JC KriesherFirefighters had a knock on a fire in this house on Panther Valley Rd. in Wayne Twp. within minutes of arriving on the scene.

Chief 34-02 arrived on the scene to find a working fire with active fire in the upper floor of a single-family dwelling. Chief 63 arrived shortly after and assigned water supply.

Summit Station Squad 34-55 was first arriving and took the driveway where a line was stretched into the building. Engine 63-14 was next arriving and staged on Panther Valley Road where they would become part of the water supply. Friedensburg Engine 34-10 went past the scene and secured a water supply from a small stream running nearby.

Firefighters from Summit Station and Liberty were able to locate the seat of the fire and had it knocked down within minutes. Ladder 58-25 arrived and brought ladders to the scene where they worked to open up the building.

With the fire knocked down and a stable water supply established, Command released the tanker assignment.

The American Red Cross was requested to the scene for a family of six that were displaced because of the fire.