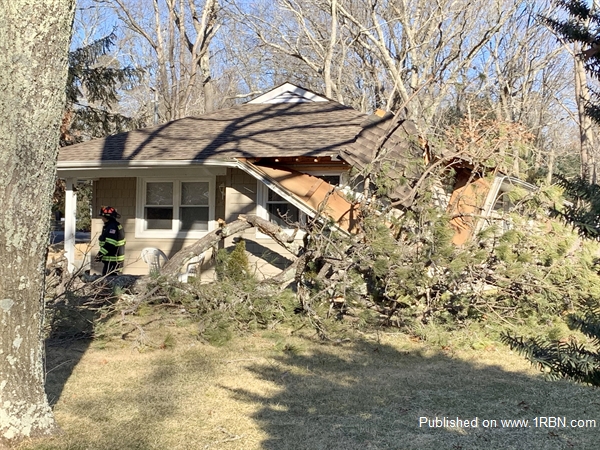 Photo by CONNOR JACOBSTree that fell on the house

Brookhaven, NY - On the afternoon of January 29th, the Brookhaven Fire Department was activated for a report of a tree falling onto a house on River Road, off Dawn Drive.

Engine 5-3-2 was first to arrive on scene. On arrival the crew from Engine 2 went to work under the command of Lieutenant John Hodge sizing up the scene. They found that a large tree had struck the home, causing serious damage, and it also had taken power lines down as well. They were joined a short time later by a crew from Engine 5-3-8 under the command of Captain Darrow.

Firefighters used the hot stick and determined that the power line was still live. They also investigated the home and found that all occupants had made it out safely without any injuries.

Firefighters secured the scene while PSEG was notified for the downed wires. A Brookhaven Town Fire Marshal was also requested to respond to the scene due to the severity of the building damage. Fire Police were on scene to assist with traffic control. All units were back in service in about 30 minutes.