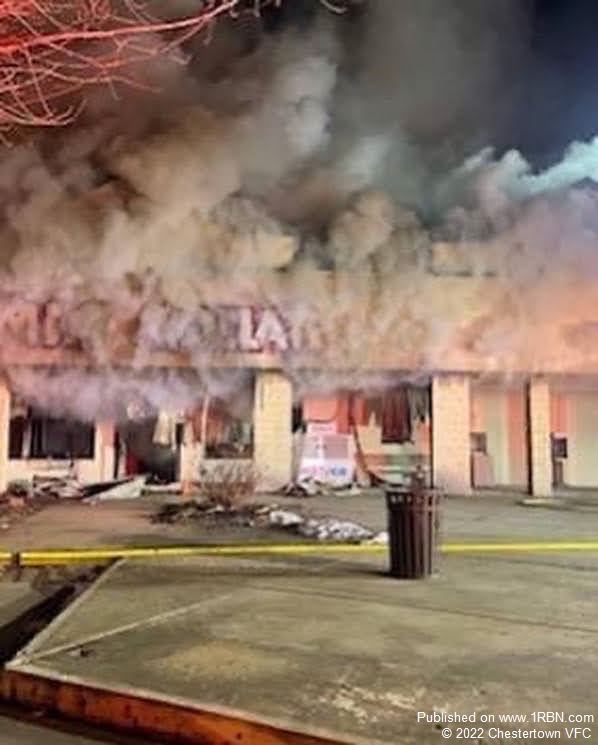 Photo by Chestertown VFCPhoto was taken just after the arrival of the 1st Engine in the rear of the building. This is a photo of the front. 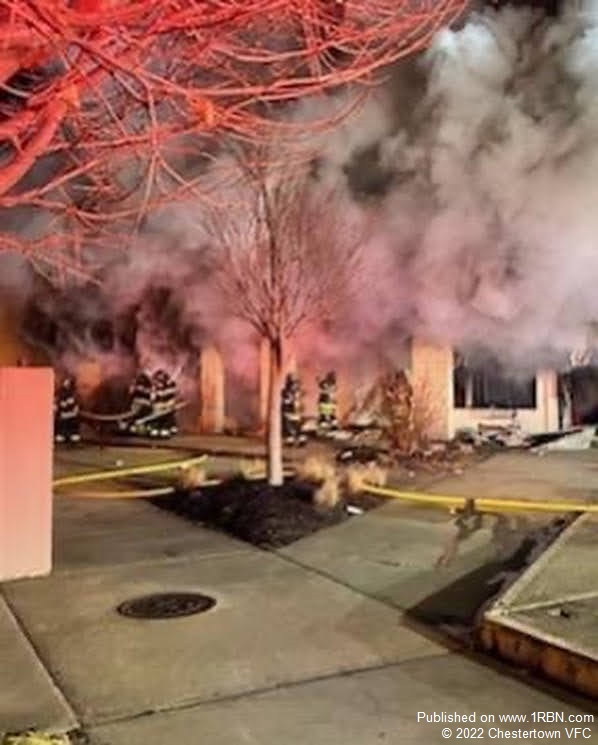 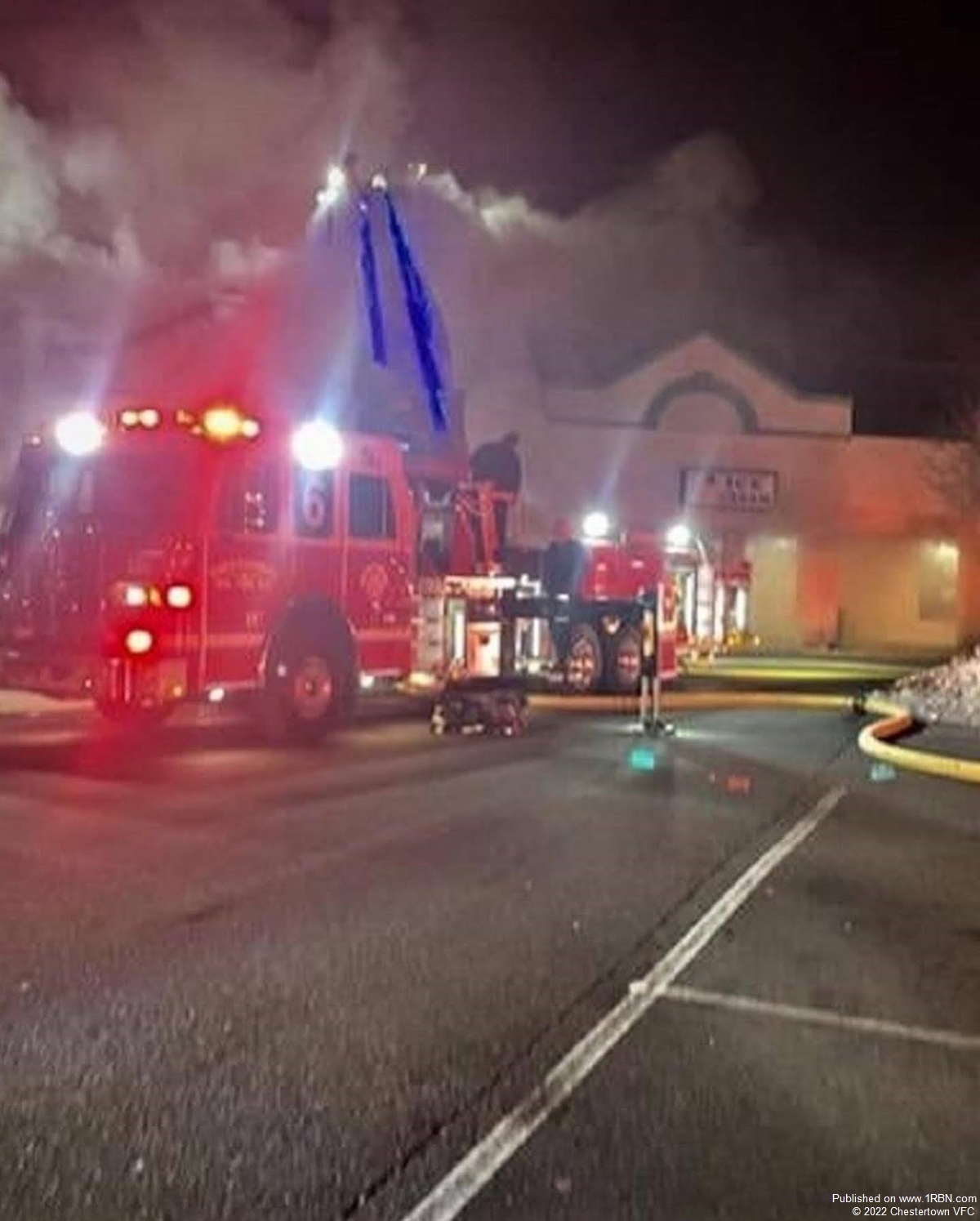 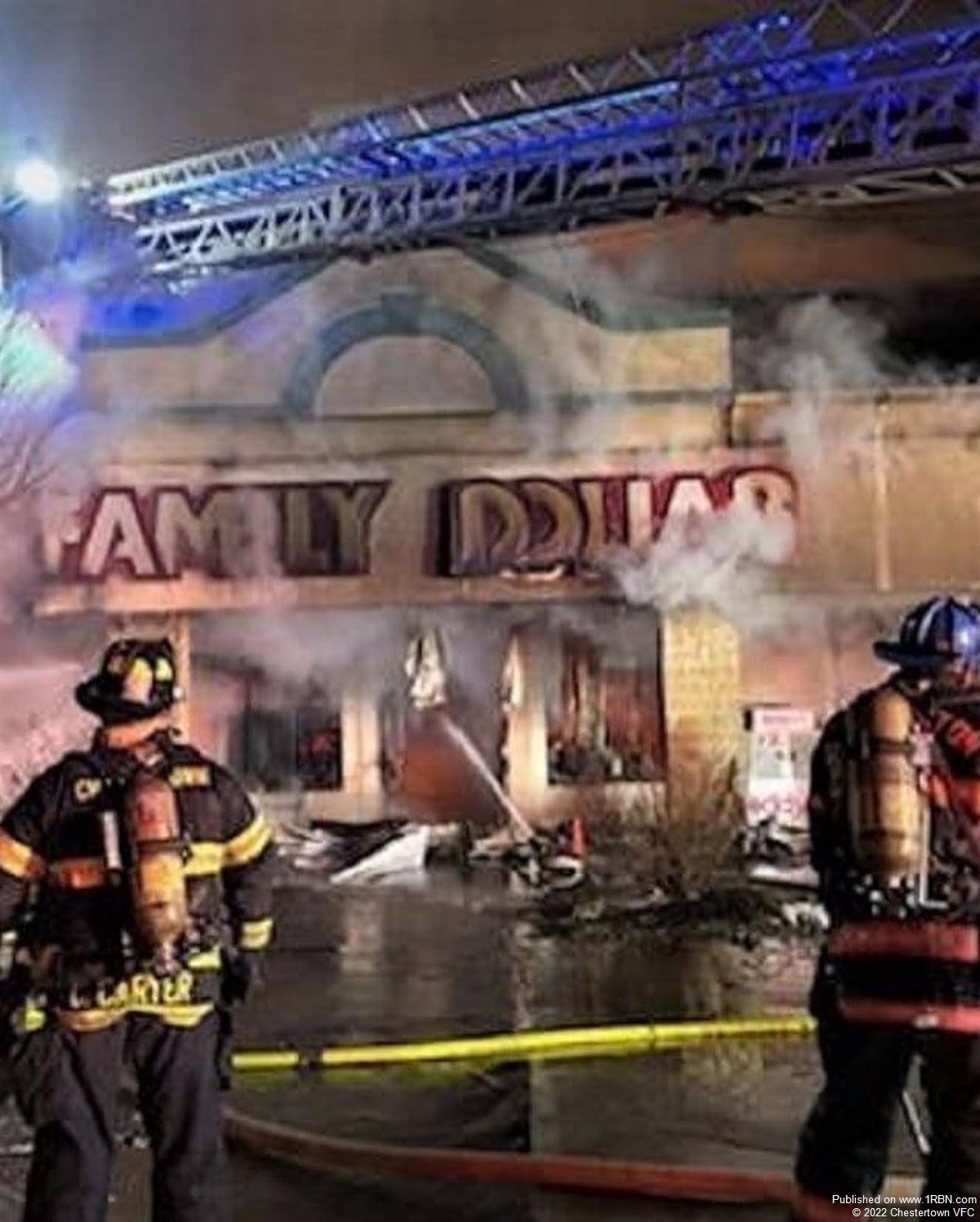 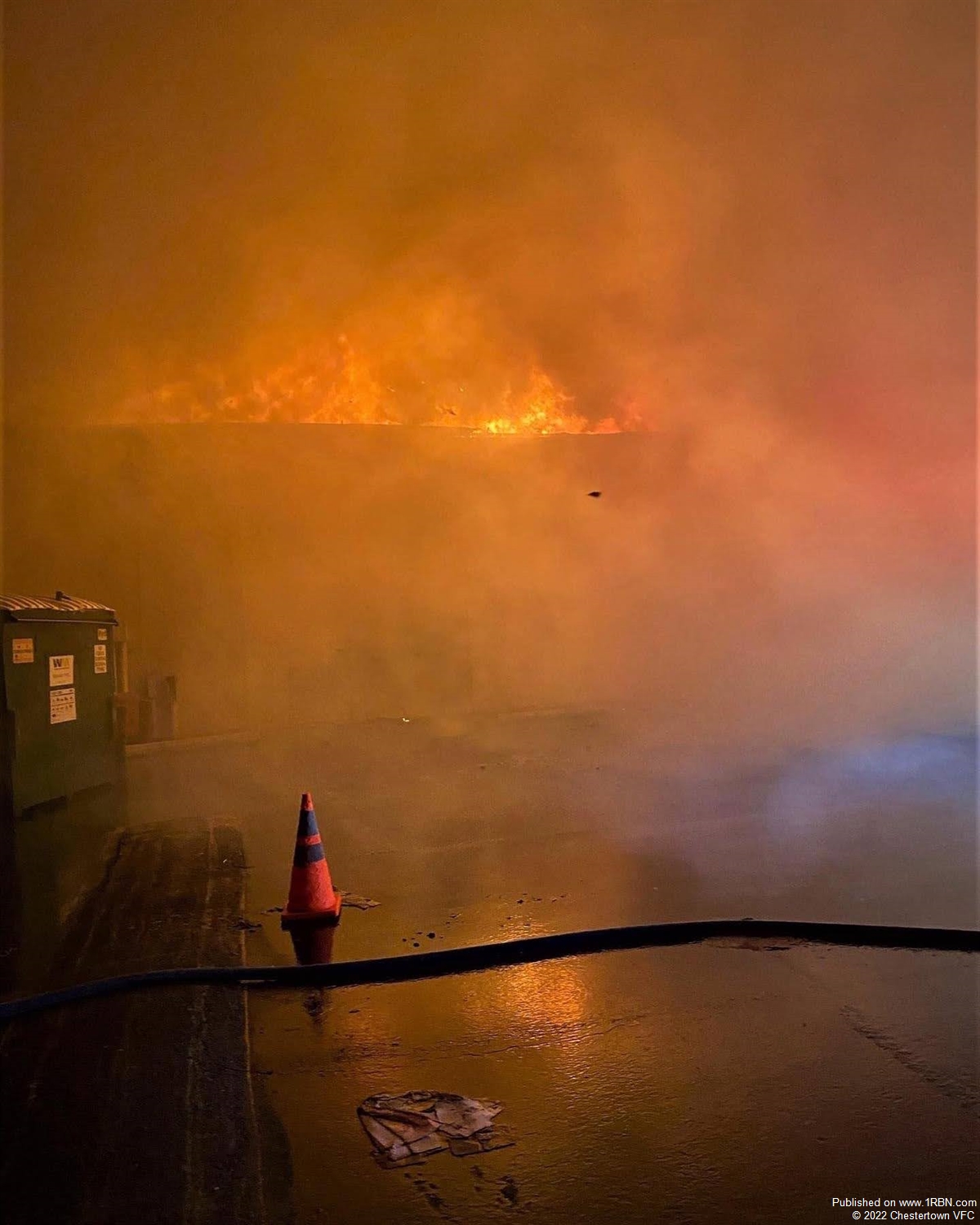 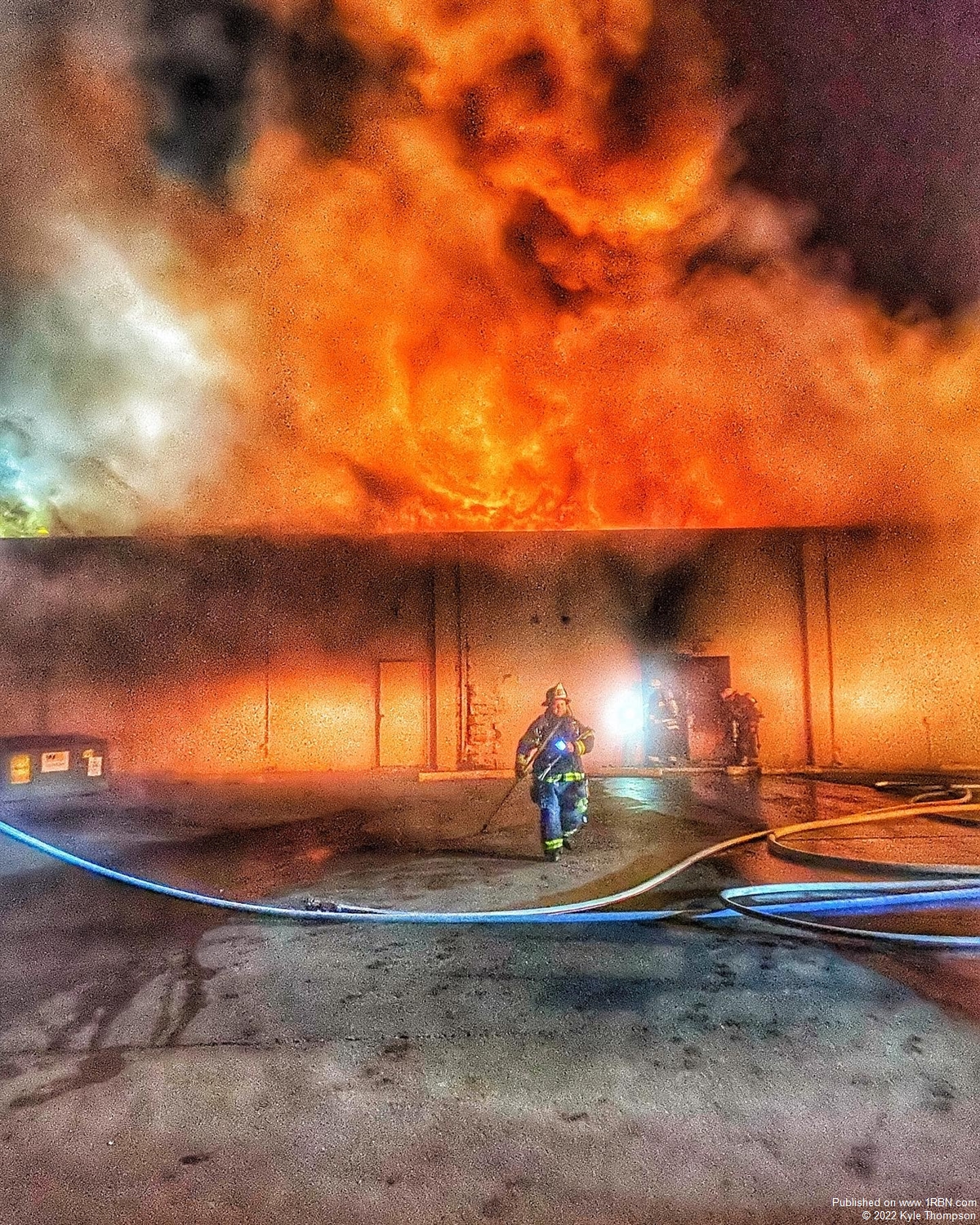 At 7:48 pm on Friday, January 21, 2022, the Chestertown Volunteer Fire Company, along with multiple Mutual Aid Companies, was dispatched for the Working Structure Fire at the Family Dollar store, 13 Washington Square, in the Washington Square Shopping Center. This would escalate to a 3-Alarm fire.

First arriving was Chestertown VFC Fire Chief John “Otis” Darling. He happened to be having dinner at Luisa’s Cucina Italiana restaurant, there in Washington Square. As he exited the restaurant he could see heavy smoke issuing from the building. Ambulance 8-1, with the Kent & Queen Annes Rescue Squad, arrived at the rear of the building, also reporting heavy smoke there.

When our first engine arrived, a Chestertown VFC crew forced entry through the back door and were immediately confronted with heavy fire, which was immediately knocked down with an 1-3/4” hose. However, operating in zero visibility conditions, the crew did not get any relief from the intense heat. Using a TIC (Thermal Imaging Camera – uses infrared technology to find and measure heat) the room was scanned to get a sense of where the fire was. When the TIC was pointed towards the ceiling, it measured a temperature close to 1000° Fahrenheit, indicating heavy fire in the roof space. At this time, the decision was made to back out of the building. Metal roof trusses exposed to that kind of heat quickly lose integrity. Not long after our crew backed out, the roof across the entire back of the store collapsed, right where this crew had been operating.

With interior firefighting operations off the table, Chief Darling directed a Master Stream operation, along with exterior manned hose lines, put in place. At the height of the operation, there were multiple elevated Master Streams playing from aerial equipment, along with two (2) ground-based Master Streams in operation. It’s estimated the total fire flow (amount of water flowing at one time) was around 1500 gallons per minute. That put a strain on Chestertown’s domestic water system. This problem manifested itself as low pressure at the fire scene. Chief Darling had Kent Dispatch notify the town about the fire and requested the auxiliary pump activated. A call was put in to Chestertown Utilities Manager Bob Sipe, who went immediately to the Water Works on North Kent Street, where he kicked on the pump. This helped alleviate the water pressure problem. During the interim, to improve the immediate problem, Fire Tankers were requested. A tanker shuttle was set-up, bringing water from another part of town. This sated the demand for water until the auxiliary pump was engaged.

Once the main body of fire had been knocked down, crews were able to reenter the building, cautiously. They avoided the rear of the building, due to the collapsed roof. Unfortunately, Family Dollar is completely gutted with severe damage, and is considered a total loss. As previously stated, the roof is partially collapsed. The business next door, Kim’s Nail & Spa, sustained extensive water and smoke damage.

Representatives of the Maryland State Fire Marshals Officer are on the scene. They are conducting an Origin & Cause Investigation. It is likely a determination of cause may not be immediately available.

To deal with extensive icing around the fire scene, a salt truck was requested. Our thanks to the Maryland State Highway Administration for sending trucks and crews.

A special thank you to the Ridgely VFC (Caroline County) for bringing their canteen to the scene. They were able to supply warm food and drinks for the crews.

During the worst of the incident, access to the entire Washington Square Shopping Center was blocked off by law enforcement.

100 firefighters and EMS personnel were at this incident. There were no injuries, a remarkable thing when the amount of ice, which created slip & fall hazards, is considered.

Special recognition to Marydel VFC and Cheswold VFC for standing by at our station, providing fire and life safety coverage to the Chestertown and surrounding community.