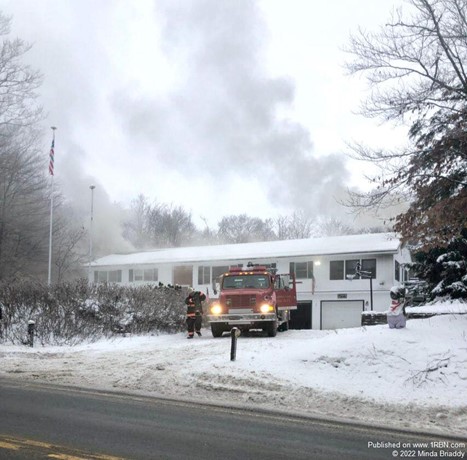 SANTA CLARA, NY - A member of the Tupper Lake Volunteer Fire Department fought a fire at his own home Thursday morning, January 13th, saving the structure.

Mrs. Briaddy, the homeowner's wife, was getting her son off to school when the boy noticed smoke coming from the eves of the house. She immediately called 911 and then her husband, John, who was 15 minutes away. John started back home, but there was one stop he had to make. Just a half mile from his home was the Tupper Lake Fire Department sub station that housed one lonely piece of apparatus. John grabbed it along with his gear and headed to his house. Once on scene, he put the engine into pump gear and started fighting the fire from the exterior. Another local firefighter joined in the battle to save the house, hitting flames as they peaked out from the eves of the house.

Franklin County Dispatch had paged out Tupper Lake, and at the request of command called Saranac Lake for their tanker and Paul Smith Gabriels for manpower. Piercefield VFD covered the Tupper Lake station. The fire was knocked down and overhaul was conducted. Franklin County Cause and Origin responded and conducted an investigation, the results of which were not immediately available. Saranac Lake EMS stood by, as well as New York State Police.