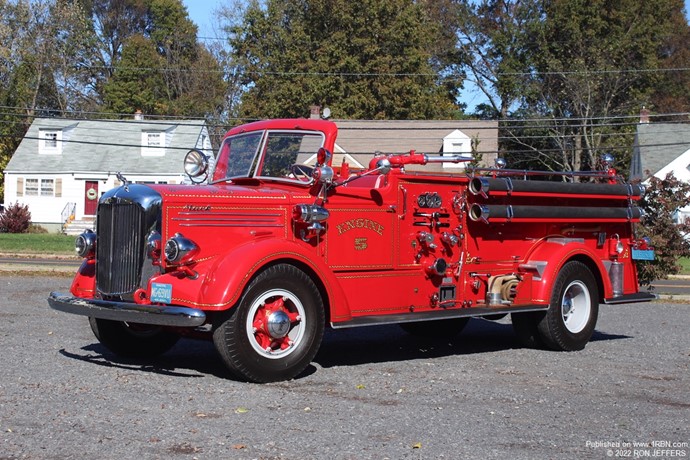 Photo by RON JEFFERSSomerville Engine 5's 1942 Mack ceremonial unit, as seen in 2019, has been restored to duty by local firefighters after it was damaged in a recent storm.

SOMERVILLE, NJ - After four months of overhauling the engine and transmission of their 80-year-old Mack pumper, plus other work, the fire department's showpiece apparatus is almost ready to return to its ceremonial calls that includes parades and firefighter funerals.

Old Engine 5's 1942 Mack 1000-GPM pumper was trapped inside of the East Main Street firehouse, alongside the swollen Peters Brook, at the height of Tropical Storm Ida, last September. Several feet of water poured into the firehouse with the Mack underwater until it receded, days later.

The veteran rig was pulled out of the building, placed on a flatbed, and transported to a dry barn in Warren County. It was dried out and repaired by Firefighter Pat Weston and other members of the S.F.D. maintenance staff, according to Rich O'Neill, curator of the Somerville Fire Museum and caretaker of the Mack. O'Neill drove that rig to emergencies during its decades of service to the community.

The apparatus was driven back to Somerville under its own power in December. It was originally assigned as Engine 1. In-house restoration work was done on the veteran pumper by members during the 2000's, they said.