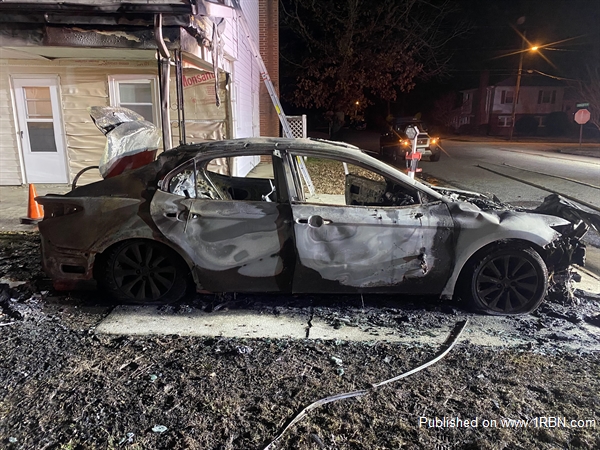 Crews put a quick stop to a car fire, stopping the spread to the house and causing more property loss.

On the morning of December 26th a 911 call came into Hopewell Police Communications reporting a possible car fire. The call was quickly upgraded to a structure fire do to how close the car was to a house. The caller reported hearing an explosion and saw the car on fire next to the house. Units arrived on scene within 4 minutes of being dispatched and reported a car fully involved that was catching a built-in carport to the house on fire as well. Quick actions by firefighters on scene stopped the fire from further spreading into the structure and causing more loss to property, also allowing the property owners to not have to be displaced during the holidays. The scene was brought under control in a quick and timely manner with just tank water supplied from the Engine company on scene. Further units on scene checked for extension into the home. The Hopewell Fire Marshal’s Office is currently still investigating this fire at the time of this writing. Units on scene included Engine 1, Engine 2, Quint 1, Medic 1, Medic 2, Battalion 2, and FM2.