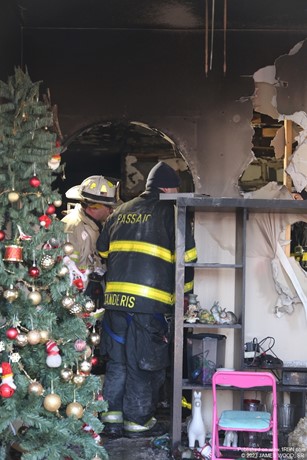 Photo by JAMES WOOD, SR.Chief Patrick Trentacost looks over the arson team as they look for the cause of origin.

PASSAIC, NJ - An alarm came in around 12:30 P.M. on 12/28/22 with a full response for 404 Oak St. Battalion Chief Colavitti arrived on scene and confirmed a working fire with smoke pushing from the front door and fire coming from the first floor 'Delta' side. One line was advanced in the front door to the kitchen where the fire was located and knocked down. The Passaic arson team was called to the scene to try and determine the cause of the fire, which appeared to have been from a faulty refrigerator. The fire was placed under control in less than one hour. There were no injuries reported.