Photo by WashCoMDFireCalls (01)Firefighter work a dual entrapment for 45 minutes to free both entrapped subjects. 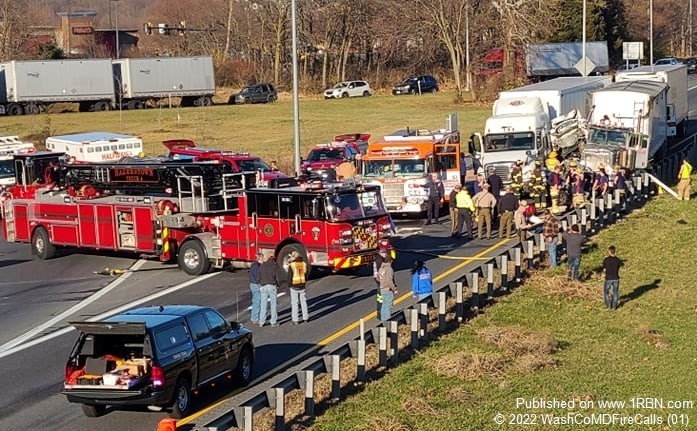 On the afternoon of December 14th, Halfway was alerted for the Engine and Medic Unit for a Personal Injury Collision with Hagerstown and Maugansville Crews at 13:58 hrs on Interstate 81. Washington County had reports of an accident involving a Tractor Trailer. During response, Washington County advised units they had received additional calls reporting one vehicle suspended in the air between two tractor trailers. Units arrived to find a five-vehicle accident involving three tractor trailers and two passenger cars.

Battalion Chief Adam Hopkins from HFD arrived and quickly evaluated the scene as he established I-81 Command. Firefighters were faced with two heavily entrapped patients in two separate vehicles. One was in a passenger vehicle that was suspended between two tractor trailers as reported by callers. Firefighters worked for 45 minutes two extricate both patients that were entrapped using tools off of Rescue Squad 13, Truck 4, and additional tools brought to the scene by Emergency Vehicle Services that were pulled off of Williamsport Fire & EMS Rescue Engine which was out of service in their shop. Command confirmed both patients extricated at 14:43hrs.

Firefighter were committed on the scene for another hour working to mitigate a fuel leak and to assist with the multiple hazards in the roadway. At 15:59 hrs, Chief Hopkins terminated command and released all units except for Engine 4, HazMat 20, and Rehab Unit 25. They remained on the scene standing by for the different wrecker they had on the scene working to separate the mangled cars from each other. All fire department crews were clear of the scene by 16:36 hrs that afternoon.

The massive accident sent two people to Meritus Medical Center both classified as Priority 2 Traumas. Two firefighters were injured during the incident but both had minor injuries and did not require transport to the hospital by EMS. The cause of the collision is being investigated by Maryland State Police.