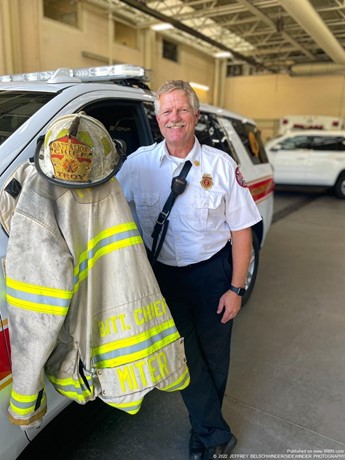 TROY, NY - The City of Troy’s Battalion Chief, Thomas Miter, is retiring after 36 years of service.

Chief Miter started with the Troy FD in 1980 to 1981, but he then joined the Air Force to serve his country. In 1986, Chief Miter rejoined the department and was stationed at Engine 5 for a large portion of his career. Miter was promoted to lieutenant in June of 1994 and transferred to Truck 1 in Lansingburgh until 1997 before moving to Truck 2 and then taking a promotion to captain in 1998. During his time as captain, Miter spent time with Engines 6 and 2, and found his way to one of the busiest units in the City of Troy, the Rescue Squad.

Chief Miter spent 15 years on the rescue squad until 2015 when he took his final promotion to Battalion Chief. He was known as one of the work bosses to his brother and sister firefighters who worked with him throughout his career until his final day on the job, September 21, 2022.

During his 36 years of service, Chief Miter handled some of the biggest fires in the city of Troy's history, including 701 River Street Marshall Ray Apartment Building, Alpha Lanes Bowling Alley, Junk Yard Fire on Pawling Avenue, Troy Lumber Yard Fire, Valley Green Apartment Fire, and the massive apartment complex fire on 4th Street and Washington Street. Numerous Troy firefighters who have served next to Chief Miter stated that he is going to be greatly missed.

During his retirement, Chief Miter plans to buy and live on a sailboat while traveling with his wife by his side. He also plans on traveling with his family to several dream locations, and wants to complete several projects around the house.

Sidewinder Photography would like to wish Chief Miter a happy, healthy, and long retirement!