JEFF RICHARDS WAS A POPULAR AND LOVED FIREFIGHTER 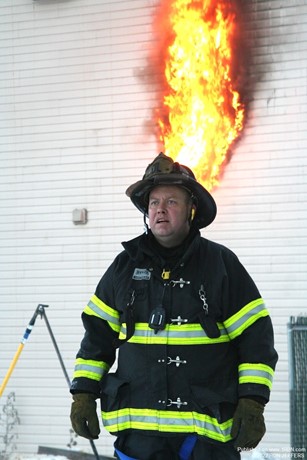 There was a photo posted on Facebook of a young boy in fireman's boots, that were almost up to his waist, standing in front of West New York Truck 1's old Seagrave tiller, at the Tyler Place firehouse.

At a very early age, his dream was to become a firefighter. Jeff Richards accomplished his goal and retired in 2020. On 9-11-22, Firefighter Richards, 54, lost his hard fought battle with cancer.

“You could always count on him for a wisecrack or a questionable meal. On the fire ground there was no one more reliable or dependable,” was a quote from the North Hudson Fire officer's Facebook page.

As a young man, Richards became an auxiliary firefighter in West New York. That was an old Civilian Defense position that was popular since WW II. He, and many other young men, became volunteer/auxiliary firefighters that rode the apparatus and assisted career members at fire scenes. This was the beginning of what would become a professional career in public safety for many that joined.

Taking civil service tests, Richard first became a West New York police officer. He served his hometown in that position for seven-years. His father, Tom, is a retired detective. In 1997, he accomplished his goal as a firefighter with the WNYFD. In 1999, his department became part of the newly established North Hudson Regional Fire & Rescue, along with four other municipalities.

He couldn't get enough of the fire service, and related jobs. When he and his family moved to Brick, he became a volunteer with the Laurelton Fire Company. In addition, he has part-time fire service related jobs with PL Custom and Fire & Safety Services.

He was a popular person in all of his positions. “A funny, caring guy, with a totally sarcastic sense of humor that lit up the room,” said his brother Tim, a captain with the North Hudson department.

Outside of the fire service, his greatest joy was his wife, Gael, and daughters Molly and Bridget.

Yes, to know him was to love him.