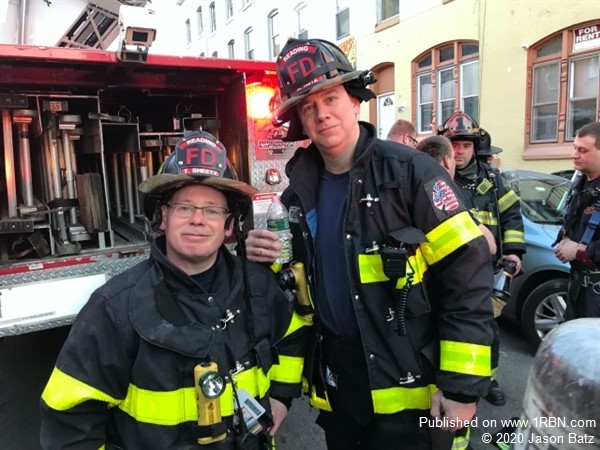 Photo by Jason BatzReading Firefighters Tom Sheetz and Andrew Kutz pose after working a job on South 10th Street in 2018.

Congratulations to Reading Firefighters Andrew Kutz and Thomas Sheetz on their retirements!

Andrew Kutz was hired in April of 1994. After completing the fire academy, Kutz was assigned to the B platoon as a Jumper Firefighter. Over the next 14 years, Andrew would work in various positions in the department with the platoon. In November of 2010, FF Kutz was assigned to Tower 1 on the B, first as the firefighter/bucketman and then the driver in February of 2018. FF Andrew Kutz served the city for more than 26 years remaining on the B platoon.

Tom Sheetz was hired in June of 1997. After completing the fire academy, Sheetz was assigned to Engine 5 on the A platoon. FF Sheetz spent the next several years on the Engine under the tutelage of FF Bruce Briner. Tom would transfer to the B platoon in October of 2008 when he took an assignment on Engine 1. FF Sheetz transferred back to the A platoon in January of 2011 when he accepted a position on Engine 3. In February of 2017, Tom moved across the floor to drive Ladder 1. FF Tom Sheetz served the city for more than 23 years.

We wish them the best of luck!