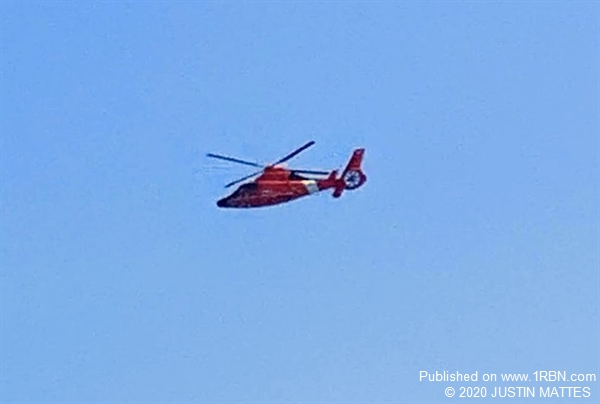 During the summer months the United States Coast Guard routinely patrols the coastlines in MH-65D Dolphin helicopters based out of Air Station Atlantic City. The MH-65D Dolphins carries a crew of four, two pilots, one flight Mechanic and one Rescue Swimmer. The Rescue Swimmer is a certified Emergency Medical Technician (EMT who can be lowered out of the helicopter to assist personnel in distress. The Dolphing can also deliver dewatering pumps to sinking vessels, hoist victims from the sea with its rescue basket, and can MEDEVAC injured persons with a rescueu litter for delivary to local hospitals. The helicopter's radius of actioon extends out to 150 nautical miles. Air Station Atlantic City also provides multiple aircraft and crews to protect our Nation's Capital on a 24 hour, 7 days per week basis in Washington D.C. at the National Capital Region Air Defense Facility (NCRADF) under the operational control of the North American Aerospace Defense Command (NORAD).