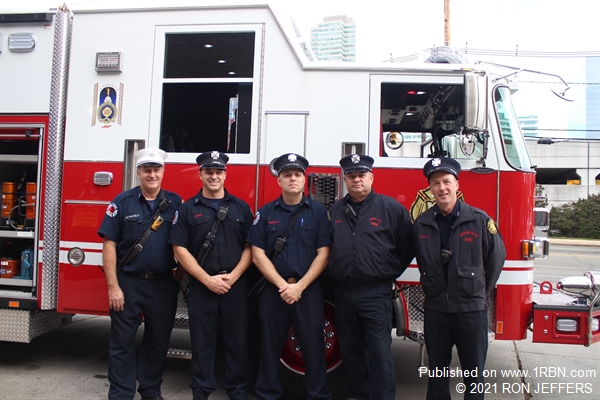 On Father's Day, Jersey City Captain Vic "Buddy" Petrucelli, left, retired. He was appointed to the F.D.J.C. on Aug. 16th, 1982, and he was promoted to captain on Jan. 13, 1989. Petrucelli was one of the original captains assigned to Rescue Co. 1 (Group B) when the company was re-organized on April 26th, 1991, and he retired from that company on June 20th. His son, Andrew, is a member of Rescue 1 (Group B) and nephew Stephen is a member of Engine 17 (Group C). On his last tour, he was honored with a drive by of all fire companies, from all four battalions, in front of the Communipaw Avenue firehouse, to wish the veteran captain well in his retirement. In the photo, Captain Petrucelli is seen with his crew on November 7th, 2018, when Rescue 1 placed their new Pierce apparatus into service, following a brief ceremony and blessing at Fire Headquarters.