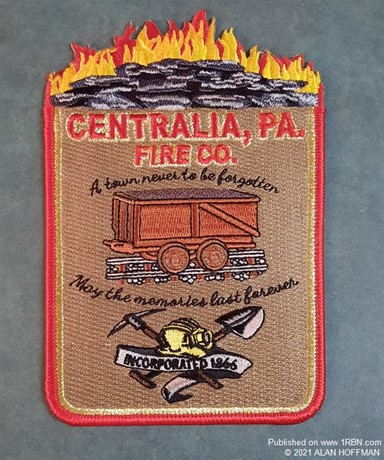 This collectible patch honors the borough of Centralia, PA and the still active Centralia Fire Company, The fire company has approx. 10 active members but they do not wear a patch. This is not an official patch worn by the fire company, It was designed and produced by Susquehanna Valley Emblems in 2012 to recognize the 50th year anniversary since the underground fire accidentally started. The patch is 6’’ tall, fully embroidered and features gold mylar thread. Centralia is a borough and a near ghost town in Columbia County Pennsylvania its population has dwindled from over 2,700 residents in 1890 to 5 in 2017 All properties in the borough were clamed under eminent domain by the commonwealth of Pennsylvania. In1992 (and all buildings therein were condemned) , and Centralis Zip Code was revoked by the postal service in 2002. A few residents continue to reside there in spite of the failure of a lawsuit to reverse the eminent domain claim. On October 31st 2013 A lengthy battle over eminent domain culminated when 8 residents of Centralia settled their lawsuit against state officials who had been trying to evict them from their condemned homes. This settlement , notice of which was filed in U.S .District Court, Allows the residents to stay for as long as they live.