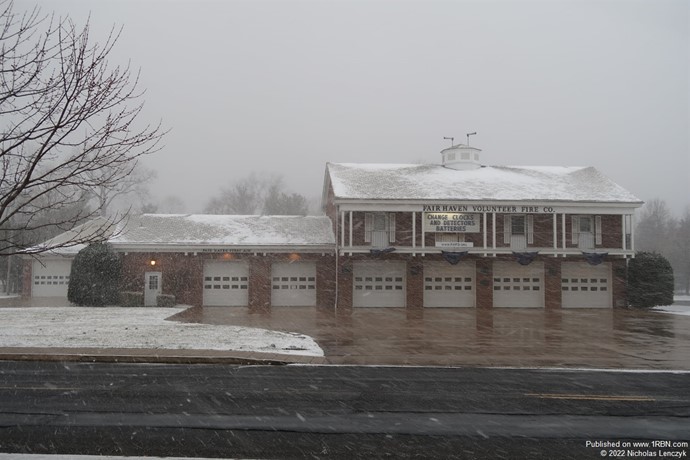 Photo by Nicholas LenczykThe Fair Haven Volunteer Fire Company No. 1 located at its present address since 1952. This was the second fire house for the company. The first one was located a half mile away on Fair Haven Road and still exists today as a professional building.

FAIR HAVEN, NJ - The Fair Haven Vol. Fire Company operates one firehouse located at 645 River Road in Fair Haven. The property for this firehouse was purchased in 1948 and the completion of the firehouse itself happened in 1952 as a four-bay building.

In 1962, the two-bay extension on the west side was created to house the first aid squad. In later years, two additional structures would be built on the property. In 1968, an "Outback" building was built featuring a kitchen and more storage. This building would also act as a concession stand for the annual firemen's fair. In the 1980's, another storage building was built on the western back portion of the property that housed bathrooms, offices, and two additional bays used for cascade and water rescue equipment.

In late 2008, the front two bays were torn down and a new addition for the "New Generation" was built in anticipation of the future. This addition increased the height, length, and width of the building to house three vehicles. In 2016, after the completion and arrival of a new Pierce Enforcer pumper, the two newest responding apparatus were relocated out back along with an Air-Rescue Unit already being housed there.

This property was the second of the Fair Haven Vol. Fire Company No. 1. The first location was located a half mile away off of Fair Haven Road and still exists today as a professional building.