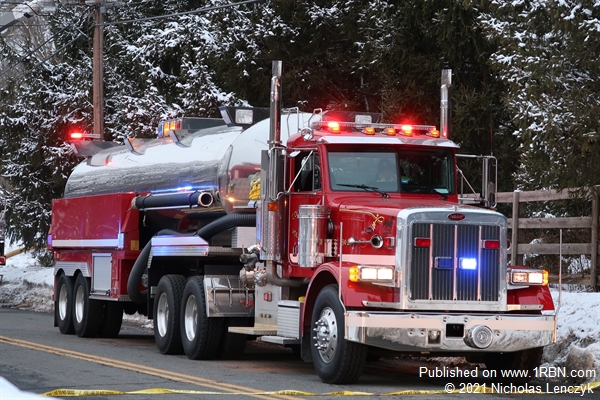 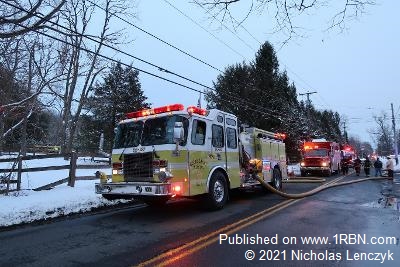 Photo by Nicholas LenczykColts Neck Station 1's Emergency One engine 84-1-80 pumping in a relay at the driveway of the ranch dwelling.

On Thursday February 11th of 2021, Colts Neck Township fire departments responded to Boundary Road for a reported structure fire in a residence. A Box Alarm was transmitted by first arriving fire chief's bringing in neighboring communities Marlboro Township for an engine and tanker, Freehold Independent for an engine, and Tinton Falls Fire Company/Wayside Fire/Rescue as the RIT Team. The Monmouth County Fire Marshal's office was also requested for investigation as well as Township First Aid and Fire Police. The fire, located in a set back ranch, was extinguished by crews and utilities secured by JCP&L and NJ Natural Gas. Fortunately, a hydrant was located up the street but tankers stood by ready if need be. Tanker 84-2-97, Colts Neck Station 2's newer and primary tanker stood by with Station 1's 1999 Emergency One Pumper 84-1-80 which was boosting up pressure as the mid engine in a relay. Colts Neck Station 1's tanker was also on scene and is a 2018 Kenworth/Sutphen that stood by up the street with Marlboro's engine on the hydrant. Crews overhauled and started clearing after about two hours on scene.