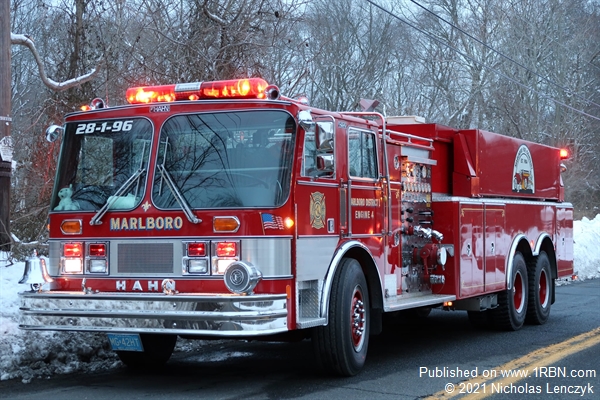 Photo by Nicholas LenczykMarlboro Fire Co. District 1 of Marlboro Twp., 1986 Hahn 1500-GPM rated pump, 2900-gallon rated tank, and 100-gallons of foam carried on board, Engine/Tanker 28-1-96 still responds to calls as seen on February 11th. At 35-years-old, there are no plans to retire in the near future and the sounds of its Detroit motor will purr for years and generations to come.

On 2/11/21 in Colts Neck Twp., (Monmouth County), a Box Alarm structure fire response was transmitted, bringing out neighboring communities and Colts Neck FD Stations 1 and 2. Wayside Fire/Rescue/Tinton Falls Fire Co. No.1 responded as the RIT, Freehold Independent for an engine, Marlboro Fire District 1 for an engine and tanker, and several other EMS units, Colts Neck Fire Police, and Monmouth County Fire Marshal's Units responded. Marlboro Twp. District 1 responded with their old reliable 1986 Hahn pumper/tanker (with 1500-GPM pump, 2900-gallon tank, and 100-gallons of foam), known by county identification numbers 28 (Marlboro Twp.), 1 (Station 1), 96 (pumper/tanker unit). Although the unit was not active at the scene when witnessed, it has seen its share of fire over 35 years of frontline service for the community of Marlboro and neighbors such as Colts Neck, who also have three tankers of their own. There are no plans to retire in the near future, as it is in excellent shape and well taken care of by members of the department. The sounds of its Detroit motor will purr for years and generations to come.