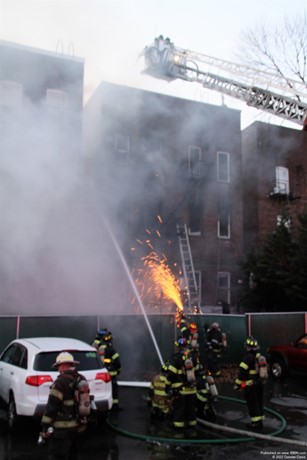 The Passaic Fire Department operated at a 4th-alarm at 896 Main Ave., January 26th. Rescues were made by arriving firefighters during the early stages of the fire. Lt. Joe Ivanicki grabbed a 65-year-old woman who was trapped by smoke and flames. The fire all but destroyed the building, which is at the corner of Harrison Street and Main Ave. Two firefighters suffered minor injuries from slips on the ice. This was Passaic’s second major fire this month. It came less than two weeks after the 11-alarm fire on Passaic Street that took more than 200 firefighters two days to fully extinguish. Companies assisting Passaic on scene came from Paterson, Clifton, Walington, East Rutherford, Garfield, Rutherford, Carlstadt and others.