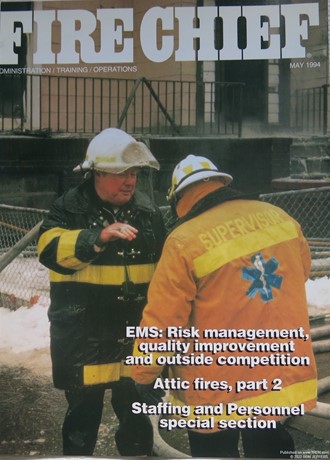 Photo by RON JEFFERSThis photo of Jersey City Deputy Chief Gerald Keegan, left, with a JCMC EMS supervisor, appeared on the May, 1994 cover of the former "Fire Chief" magazine.

Retired Deputy Chief Keegan, 92, passed away on December 31st. He retired from the F.D.J.C. in 1997 as Chief of the First Division.

The chief served his country with the United States Air Force during the Korean War from 1951-1953. In addition, he was a communicant of St. Mark's Roman Catholic Church, in Sea Girt, where he resided. He was born and raised in his beloved Jersey City.

The chief saw plenty of action during his 43-years in the state's second largest city. As a matter of fact, he was on the cover of many national fire magazines, in command of fire incidents.

On a personal note, Chief Keegan called this writer his “favorite photographer".

Operating at emergency scenes, firefighters may encounter media photographers, with huge lenses, but they still seem to get close up to operations. After seeing himself on some covers, the chief would tell me, “I didn't even know you were there!” I told him, “That's why God invented the zoom lens!”