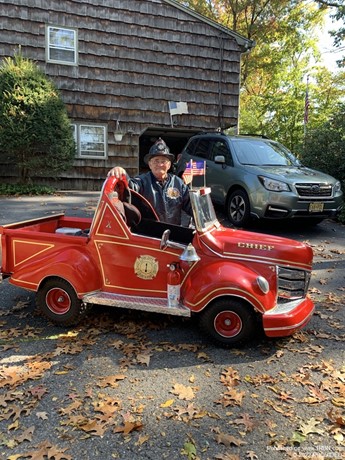 Photo by PROVIDEDRetired Northvale Firefighter Rocco Venezia's with his custom built fire chief's car that he has donated to the New Jersey Firemen's Home Museum, in Boonton. 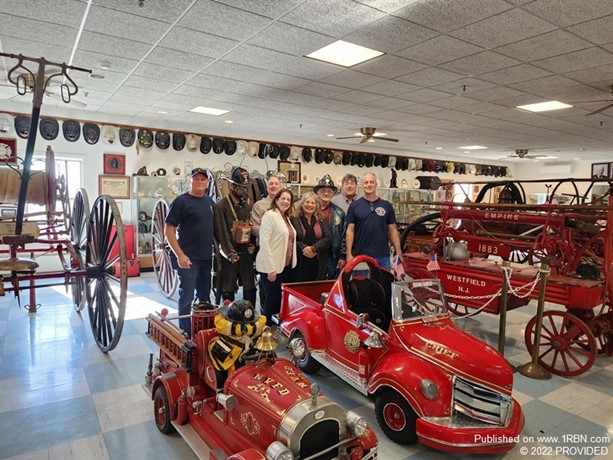 Photo by PROVIDEDFirefighter Rocco Venezia (wearing helmet) with family members and officials at the New Jersey Firemen's Home Museum with his two fire service models that are now on display for all to enjoy.

Rocco Venezia keeps busy in his retired years building things in his shop. The retired self-employed tile installer, and Northvale volunteer firefighter, has a great imagination and plenty of talent.

In the late 1990's, he spent a year building a large replica of a 1925 Seagrave pumper for his 2-year-old grandson, Nicholas. The very detailed model, that can squirt water, is now on display in the museum located at the New Jersey Firemen's Home, in Boonton.

For the pumper model, Rocco used such items as a lawn mower, baby crib and a hand truck for the chassis. It is complete with red paint and gold lettering.

Among his many projects, Rocco had plans to build a model car, around the same size as the Seagrave pumper project, several years ago. At the time, Rocco's son, Anthony, was a battalion chief with the North Hudson Regional Fire & Rescue. He has since risen to the rank of deputy chief. Anthony recommended assembling a fire chief's car.

After another year of planning and building, a fire chief's car was assembled. Construction included using a go-cart motor and chassis and scrap auto body parts. Rocco would go through scrap metal parts at Rich's Automotive Auto Body Specialist, in Emerson, where he was allowed to take unwanted materials to build the car. A damaged canoe was acquired and cut up to make the front end of the car, that resembles a late 1930's to early 1940's auto. The chief's car has fire extinguishers mounted on the running boards on each side, as well as working lights and a bell. It is finished off with red paint and gold lettering.

The model “red car” has appeared in many local parades. After contacting the representatives at the firemen's home, the replica was welcomed to the museum, parked next to the 1925 Seagrave model. This impressive museum has a collection of fire service memorabilia from antique fire apparatus, helmets, turn-out gear, patches, reading material, model toys, etc.

Rocco's current projects includes building a group of model airplane kits that he has acquired.

Firefighter Rocco Venezia's fire apparatus creations are now side-by-side in a museum for future generations to enjoy, and for people to respect those who came before us.