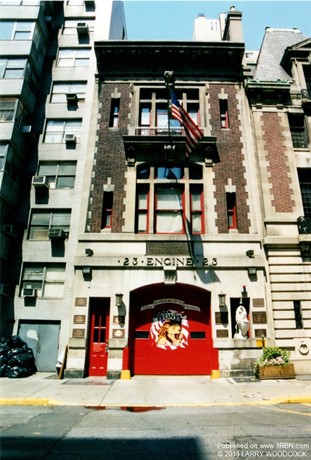 Welcome to Midtown Manhattan, a place that never sleeps and will always be the heartbeat of New York City. This area contains some of the most world famous commercial real estate and recognized buildings. It is also home to one the city’s best looking firehouses, from an architectural standpoint.

23-Engine also known as the Lions Den, is located at 215 West 58th Street. A short distance from the firehouse at the intersection of 59th Street is Central Park West.

At Broadway and Eighth Avenue is Columbus Circle, named after Christopher Columbus. The circle was erected in 1892 as part of New York City’s celebration of the 400-year anniversary of Columbus landing in America.

It is situated at the Merchant’s Gate, Central Park’s Eighth Avenue entrance. The monument in the center of the circle was created by Italian Sculptor Gaetano Russo. The monument consists of a marble statue of Columbus atop a 70 foot granite column decorated with bronze reliefs of Columbus’ ships: the Nina, Pinta, and the Santa Maria.

It’s pedestal features an angel holding a globe. The circle has appeared in over one hundred movies and T.V. series’. It is also an award winner for urban excellence.

The first due area of 23-Engine includes Carnegie Hall located on Seventh Avenue and 56th Street. Built by philanthropist Andrew Carnegie, it is one of the most prestigious places in the world for classical music. The 3,671 seat auditorium was built in 1891 and is divided into three separate auditoriums.

The main hall seats 2,800 and is named after Violinist Isaac Stern is extremely high. Visitors sitting in the top balcony must climb 137 steps to get there. As it is a New York City landmark building, it is also on the U.S. National Register of Historic Places.

Engine-23 is one of the original companies in the FDNY. It was organized on October 6,1865 and it’s first house was at 153 West 68th Street. They moved to their current location in July of 1906.

My friend Mike Shepherd, who works in Squad 41 was off duty and working in Midtown Manhattan on 9/11 at his side job, welding. He heard about the first plane strike and like most of us, just thought it was a small plane and nothing but accidental.

After the second plane, he and everyone knew that it was no accident. He was close to 23’s firehouse and went over there just as they were being sent. He told the lieutenant who he was, from what company, and he got on the rig with them.

As they headed down the West Side Highway, the towers came into view. The looks on the faces of the guys in the back with him told the story of how bad this looked and was about to get.

Mike wrote down his name and badge number and gave it to the firefighters across from him and he said what are you giving me this for? Mike said that this is going to be a bad job and a lot of people are going to die.

As they got to the scene, there was an extra turnout coat with helmet and gloves, but no pants or boots. Mike grabbed a roll up and was prepared to go in.

The lieutenant, who was covering that day, said that he couldn’t let Mike go in with them. He said to go the command post and find a chief, essentially saving his life. Mike survived both tower collapses and helped many people that day.

All five firefighters from 23-Engine perished in the collapse. Their bodies were never found. As there were many incredible stories that day and many that I have heard from guys I know on the job, this one really makes one think how things in life play out.

Mike knew these five guys for all of fifteen minutes that day and will remember them for the rest of his life. The men of 23-Engine, like so many others that day, entered into those buildings knowing that they might not make it back from this one.

23-Engine, one of the first companies established in the Fire Department in the City of New York has had ten line of duty deaths protecting the citizens of New York City, and though they are gone, their legacy and their sacrifice lives on.