An Extra Special Memorial in Hackensack 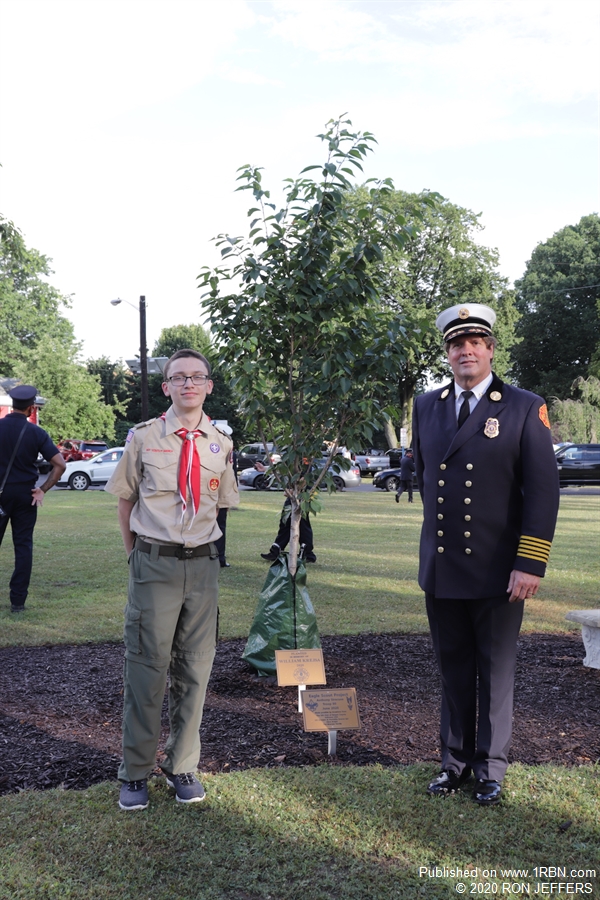 Photo by RON JEFFERSEagle Scout Anthony Siracusa with Hackensack Chief of Department Thomas Freeman at the tree planted in memory of the scout's grandfather, Firefighter William Krejsa, during the department's 32nd memorial ceremony. 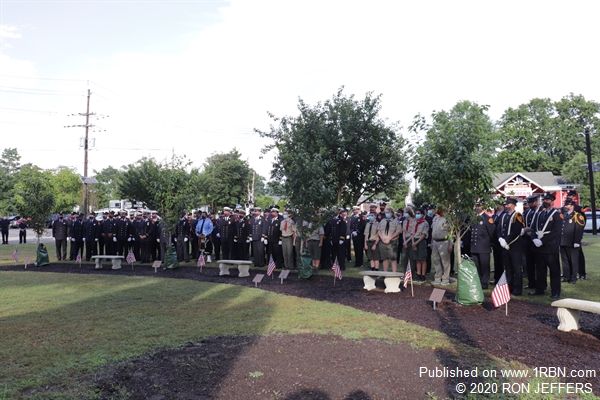 Photo by RON JEFFERSFirefighters and scouts of Elmwood Park Troop 80 line up with the five tree memorials.

For the 32nd time, Hackensack and area firefighters along with city officials, families and friends assembled at Fairmount Park for the July 1st memorial services for fallen and recently deceased members of the department. This ceremony began after five members were killed at an auto dealership fire on July 1, 1988.

There was an added part to the ceremony this year, as a local Eagle Scout decided to contribute something extra to the park. Anthony Siracusa, 17, a Life Scout, planned his Eagle Scout project and wanted to honor his late grandfather, Firefighter William Krejsa, who died on that day.

“I have attended every single memorial service since I was born, and even though I never met my grandfather, this ceremony, as well as the heartfelt stories my grandmother Clara had told me, make me know who he was and the type of person I want to be,” Siracusa said.

The Elmwood Park resident has completed his junior year at the Academy for Technology and Computer Science, in Hackensack. He said his heart kept bringing him to the firefighters memorial park.

Siracusa came up with his idea for an addition at the park, in February. This included planting five trees toward the back of the park, behind the five monuments that stand for the 1988 fallen members. Included in the plan were maintenance-free benches with a dedication plaque under each tree. He designed the project using a drone in order to take an aerial photo to use as the base for his photoshopped mock up to present to contributors.

Siracusa contacted Chief of Department Thomas Freeman and told him of his idea. The chief was very responsive; however, he informed the scout that the park was city owned and he would pass the information on to the city planner. After numerous phone calls, emails and meetings over a four month period, Siracusa was given the go ahead. He received a call from DPW supervisor Joseph Inglima to assist him with the project. With Inglima's crew getting behind the project, it was completed by the July 1st memorial. The pandemic situation didn't help, but all parties concerned got the job done.

Victoria's Nursery, in Paramus, was contacted and supplied the trees at a “generous discount.” Leon Moreyn said his company, Infineum USA, has a community outreach program. They would pay for both the temporary plaques in time for the memorial and permanent bronze plaques. The 200 Club of Bergen County made a donation to cover expenses. Also received were slanted granite markers to mount the bronze plaques onto, through the generosity of Koch Monuments, which also made the stone monuments in the park.

Others that assisted in the Elmwood Park Troop 80 project were Scout Master Bill Munson and Eagle Scouts Sean Raleigh and Mathew Ruglio. Ruglio has completed fire school classes and hopes to become a full-fledged volunteer firefighter alongside of his father, in Elmwood Park, in the future. Boy Scouts that participated were Andrew McKenna, Kyle Bednarz, Tyler Bednarz and Joey Mannarino.

At the July 1st ceremony, the scouts were lined up behind the podium, along with city and area firefighters. Chief Freeman praised the group and all who donated to the project, adding, “They did an incredible job.” The chief also praised Siracusa for honoring his grandfather in such a way.

“I had no idea how impressive this young man was,” Chief Freeman added.