Richland's Utility Has Many Uses 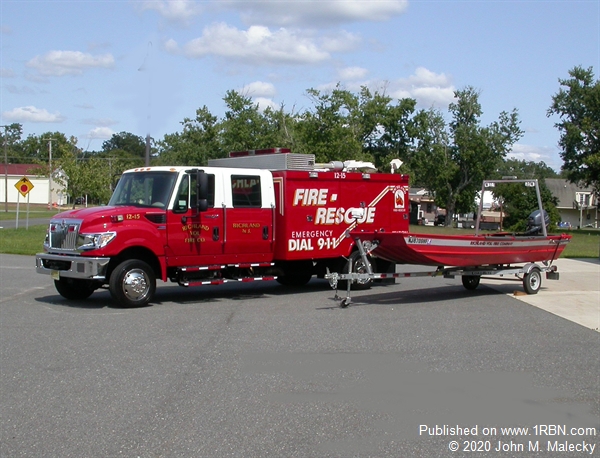 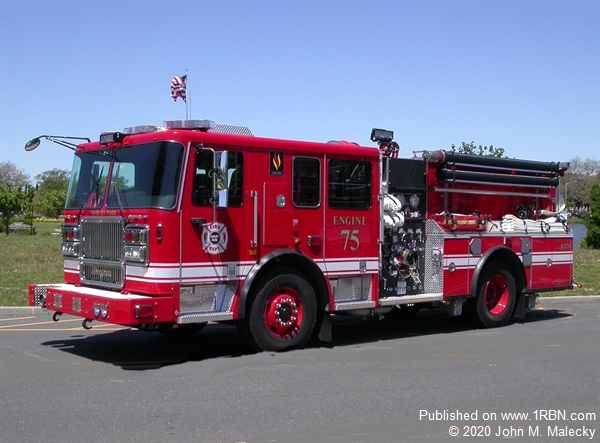 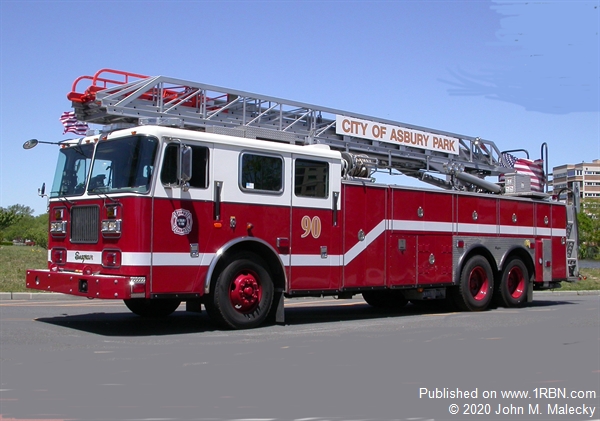 Photo by John M. MaleckyAsbury Park 1999 Seagrave TB with 100-foot aerial and 8 kw generator. It is X-FDNY L-137. It was sold by Seagrave Sales & Service. 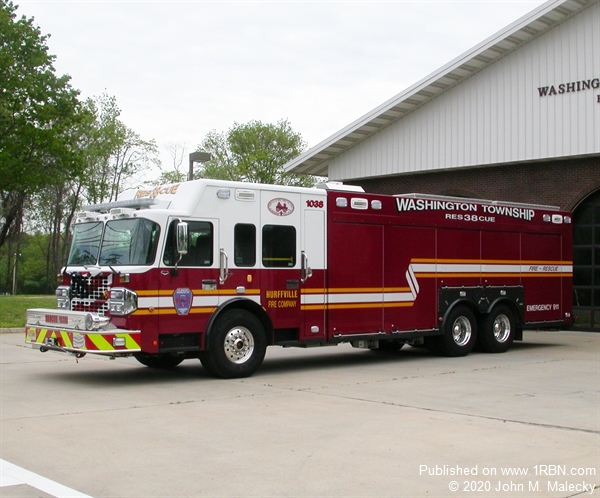 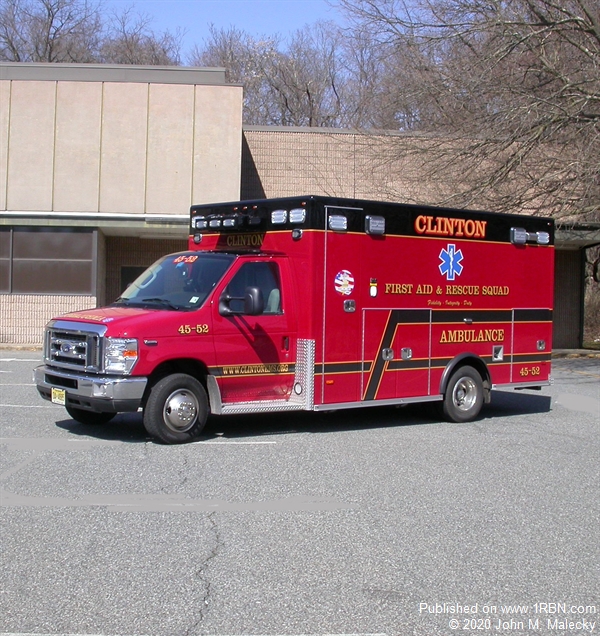 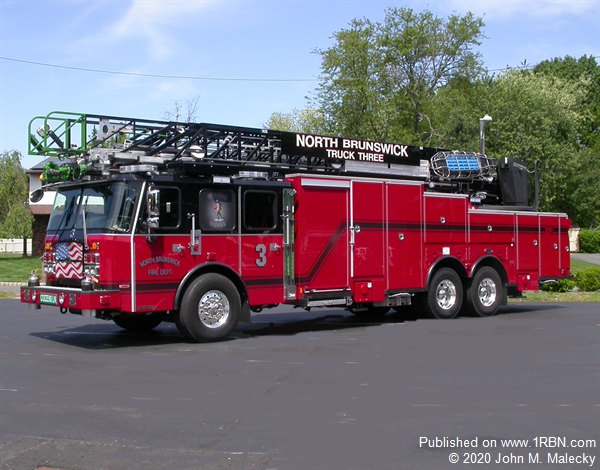 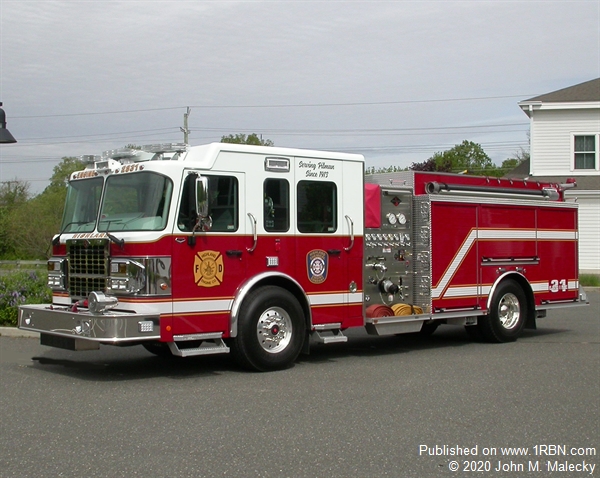 
RICHLAND’S UTILITY HAS MANY USES

In Atlantic County in Buena Vista Township the Richland Fire Company’s Utility 12-15 has many duties. The vehicle has a 2013 International TerraStar chassis with a 1997 Reading body. The original 1997 chassis was heavily damaged with a cracked frame after a collision, but the body was salvageable. Hence the newer chassis. Some of the features include an on-board 6500 watt diesel generator, Will Burt Night Scan, six ton winch and four cylinder air cascade system. Inventory includes ice and water rescue equipment, survival suits, PFD’s, an electric Jaws setup (to back up the rescue truck), and a trailer with a generator and trash pump for dewatering operations. Shown next to the truck is a 2015 Lowe 16-foot flat bottom boat with a Yamaha 20 hp engine. The truck also transports the dive team, as they are a backup for the Hamilton Township Dive Team. The area is considered recreational with lakes, ponds and gravel pits (also known as blue holes), with potential for water related incidents. Many thanks go out to Chief Tony Monfredo and Dennis Sharpe for information provided. Among the rest of the photos are two Seagrave apparatus from Asbury Park. One is a new pumper on a Marauder chassis and the other is a rebuilt former New York City rear-mount which originally saw service with Ladder 137 in Queens. We also have a massive heavy rescue in the Hurffville FC in Washington Township (Gloucester County). It has a massive 40-foot, two inch body length of non-walk-in design. Unseen from the exterior is a 300-GPM Hale pump. The body is built by Custom Fire. Next we have an ambulance from the Clinton First Aid and Rescue Squad in Hunterdon County. It is a P.L. Custom Medallion Type III and it is the last one to have “Clinton” name on it. Due to a merger involving the High Bridge Emergency Squad, the new name will be the South Branch Emergency Services. North Brunswick Company 3 recently replaced their 75-foot quint with an E-ONE 105-foot quint and it is featured this month as well. The last photo featured this month is of a Spartan ER pumper for the Highland Chemical Engine Company in the Boro of Pitman (Gloucester County). I was told that the fire company enlisted the various talents of their members to do extensive additional work on the vehicle after delivery to include tool mounting, panel installations in the compartments and modifications which permitted additional equipment storage. They are gradually adding new inventory to eventually make it a candidate to be a squad. Some features include a Metro Star chassis, Cummins L9, 450 hp diesel engine, Hale Qmax 1500-GPM pump, Pro Poly 750-gallon water tank, Harrison 6 kw generator, Whelen scene lighting, a Hurst Tool, ROM roll-up- compartment doors, and a TFT Blitzfire hand held monitor.

Firefighter 1 has delivered to North Plainfield (Somerset County) a Ferrara Cinder pumper with an extruded aluminum body, Hale Qmax 1500-GPM pump with side mount panel and a 750-gallon water tank. Some additional information has been sent about the previously delivered Frankford pumper (Sussex County). It has a 1100-gallon water tank (instead of 1000) and a Foam Pro system.

Emergency Equipment Sales & Service received an order from the Delanco EMS (Burlington County) for an Excellance remount of a 2007 Horton module onto a new Ford E-450 chassis which will also include repairs and updates.

Absolute Fire Protection has delivered to Elmwood Park FC 3, an E-ONE mini pumper on a Ford F-550 chassis. It has a 1250-GPM pump and 300-gallon water tank. Fair Lawn FC 2 has ordered an E-ONE HR-100 single axle aerial ladder with 1750-GPM pump and 500-gallon water tank. Lodi has ordered a rescue pumper and a top-mount pumper both on Typhoon chassis. All are in Bergen County.

New Jersey Emergency Vehicles has delivered to University Hospital EMS in Newark (Essex County) a rescue with a 16-foot three-inch walk-around body on a Freightliner M2 chassis. They were prepping for the Township of Medford EMS (Burlington County) a P.L. Custom Medallion Type III ambulance on a Ford E-450 chassis.