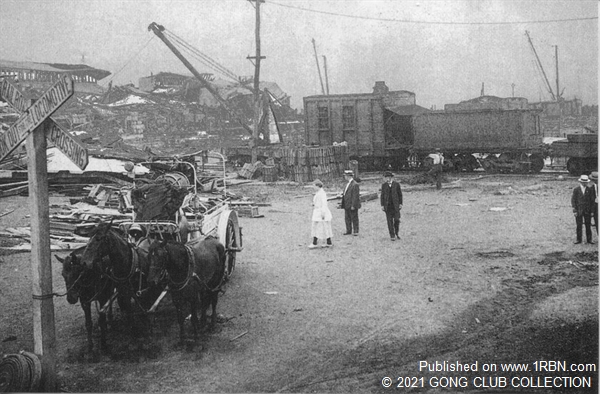 Photo by GONG CLUB COLLECTIONA horse-drawn piece of Jersey City fire apparatus is staged, with ruins from the 1916 Black Tom explosion in the background.

The Jersey City waterfront played a big role during the 9-11 attacks on our country in 2001. Areas such as the foot of York Street, downtown, and Liberty State Park were filled with first responder units from throughout the state receiving victims of the attacks that were transported by ferry boats, fire boats, and other vessels, to the New Jersey triage areas.

Before the United States got involved in World War I, one of the largest non-nuclear explosions took place on Black Tom Island, in Jersey City on July 30th, 1916, when German saboteurs destroyed a U.S. Munitions depot.

According to an article in “The Jersey Journal,” by David Mosca, the attack resulted in the establishment of domestic intelligence agencies for the United States. It was also the single event that contributed to the shift in public opinion against Germany during the war, which the U.S. was not yet involved in.

Playwright Martin Casella's “Black Tom Island” has now been adapted into a radio play by Art House Productions and is available for download. The original project was planned to include in-person readings in Jersey City, but the pandemic put an end to that idea.

“Black Tom Island” was originally commissioned and produced by Premiere Stages at Kean University in Union. The original production was presented at the Liberty Hall Museum. It received the 2018 Broadway World New Jersey Audience Award for Best New Play Produced.

The Black Tom explosion, near Ellis Island, was felt for miles. Windows in Jersey City and Manhattan were shattered. Some fragments from the blast struck the Statue of Liberty, causing the torch to be closed to visitors for repairs.

“We hope this will give our patrons a new way to experience the play and learn about this often overlooked important local historical event,” said Courtney Little, producing director of Art House. “This is the first radio play we've produced at Art House and it's proven to be a rewarding challenge."