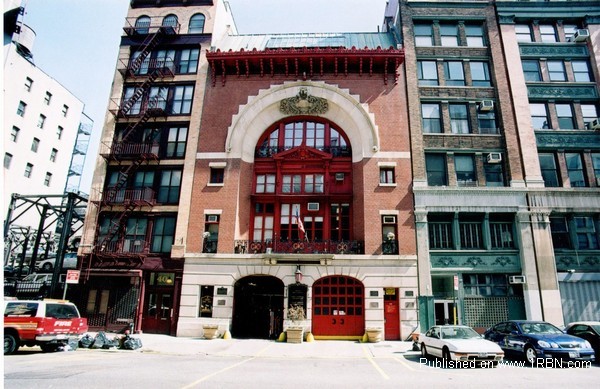 Many articles have been written about this firehouse. After all, its beauty is well noted. This house has even obtained a cult-like status and is a must see for any visiting firefighter or buff, who comes to New York City for the first time.

As any New York City neighborhood has its draw, the Bowery has 33 Engine and 9 Truck, simply referred to as the firehouse at 42 Great Jones Street. So lavish and monumental was this firehouse, that when it was built and completed in 1899, firemen from all across the city were envious of those, who would work there.

The firehouse was designed with fourth floor being the chief of the department’s living quarters, which the chief resided here until the 1920’s.

Both companies were solo with 33 Engine coming from Mercer Street and 9 Truck coming from Elizabeth Street.

The firehouse became a New York City landmark in 1968 and was added to the register of historic places in 1972. This is the only New York City firehouse to hold this distinction.

The architects, Ernest Flagg and William Chambers, had some big shoes to fill, taking over as the fire department’s primary designers of firehouses after the departure of Napoleon Lebrun. His last design came in 1895.

On Saturday, March 25, 1911, 33 Engine arrived first due to a fire that changed the fire service forever in this city and across the country. A fire started on the eighth floor of the Triangle Shirtwaist Company, a ten story building on the corner of Washington Place and Greene Street.

Over 700 people were at work in the building, 600 of which were mostly immigrant girls between the ages of 16 to 23. The fire spread rapidly due to many combustible garments hanging above the worktables. Many of the girls were able to escape by taking a freight elevator and the stairs. And, some exited by the fire escapes, but many were trapped by locked fire exits, which were left that way by sweatshop managers to prevent theft.

Many were overcome and died from smoke. Others, with no choice, jumped to their deaths. Firemen tried in vein to ascend scaling ladders and set up life nets, but found it difficult at best due to jumpers. The fire was extinguished relatively quickly, but the damage was done. In all, 146 people lost their lives.

The chief of the department at the time, Edward Croker, who was a staunch supporter of fire prevention and building codes, previously lead a campaign against dangers like the Triangle Shirtwaist Company, only to have it squelched by wealthy landlords and political red tape, stating that it is only a matter of time before a catastrophe happens.

His worst fears came true. Amid testimony to city officials that evidence from the fire marshals showed that many factory owners would rather take a chance on a loss of life then spend five or ten dollars on preventing it.

The fire sickened him so much so that after a 27 years on the department, he turned in his badge and founded a fire prevention company. He built that company into one of the leading companies in the country.

The Bowery neighborhood has seen many changes over the years from an impoverished area in the 1920’s with dark streets filled with flophouses and cheap saloons to New York’s skid row, a place for alcoholics and homeless persons, referred to as “Bowery Bums” from the 50’s through the 70’s.

Since the 90’s, that has changed, the Bowery and the Lower East Side has been revived and is now a bustling neighborhood with restaurants and bars for every age group and taste. 33 Engine is one of the original companies in the FDNY established on November 1, 1865 as a volunteer company.

9 Truck is also an original FDNY company and was organized on October 20, 1865 with several locations before moving here. They also had a second section Ladder 9 (2), which was organized in July of 1883 and was disbanded in March of 1889 to organize Ladder 20.

These two companies have had 18 line of duty deaths, ten which, occurred on September 11th, difficult circumstances to say the least for any firehouse to overcome. A testament to how a firehouse survives such losses is a dedication to its service and a belief in carrying on a tradition and representing those, who gave the ultimate sacrifice.