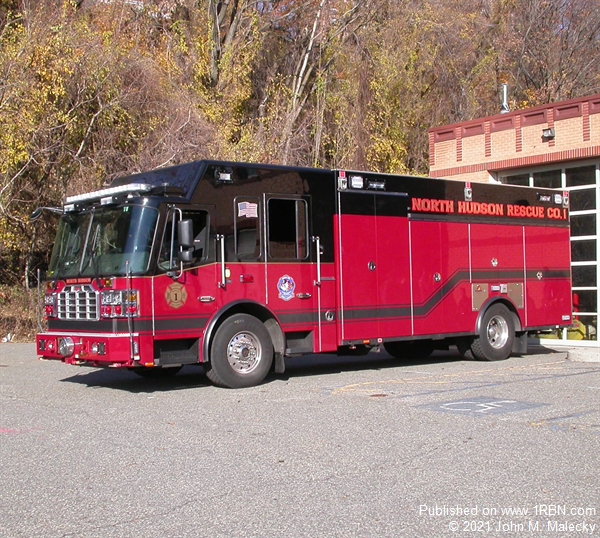 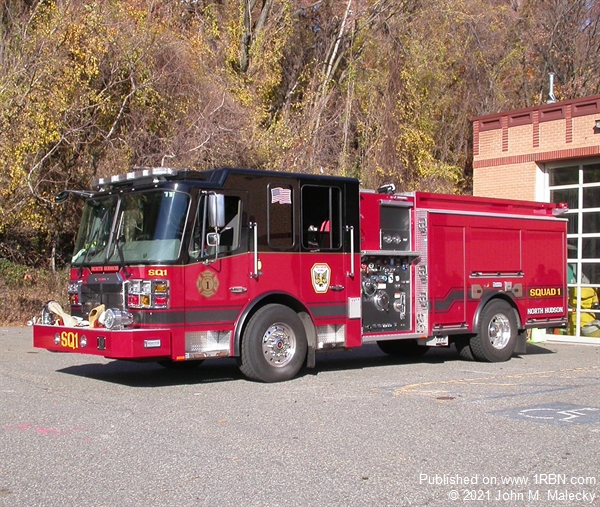 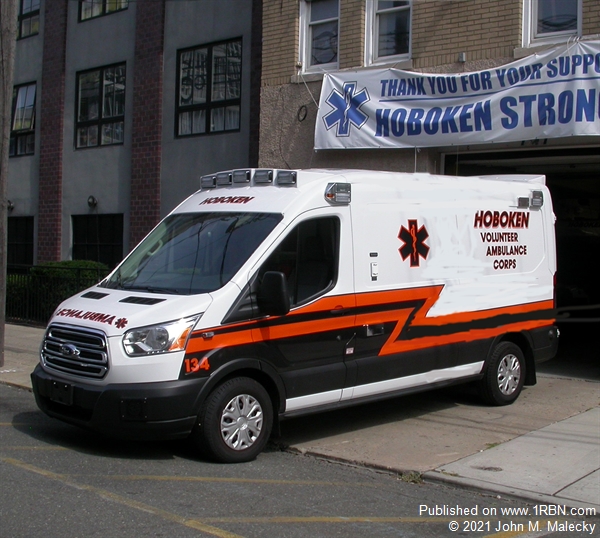 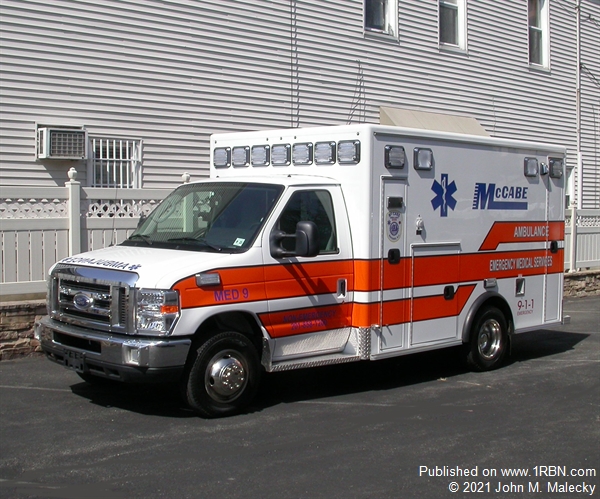 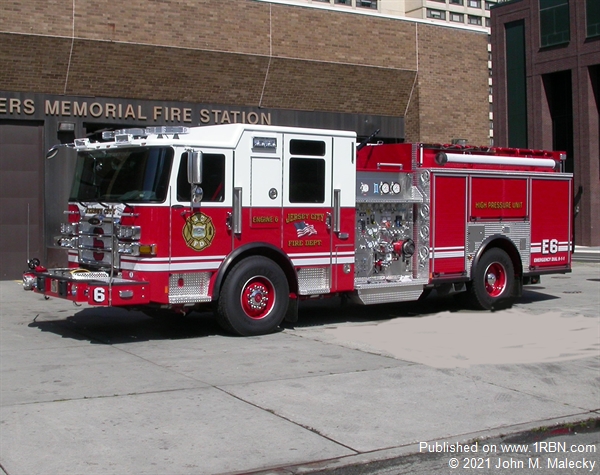 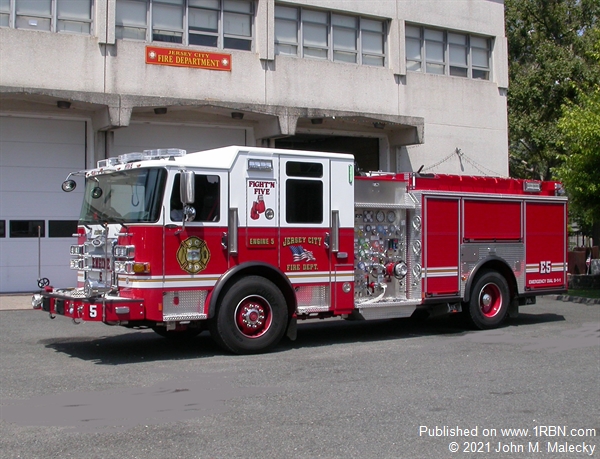 Photo by John M. MaleckyJersey City Engine 5, 2020 Pierce Enforcer 2000/500. It is one-of-three delivered. They were sold by Fire & Safety Services. 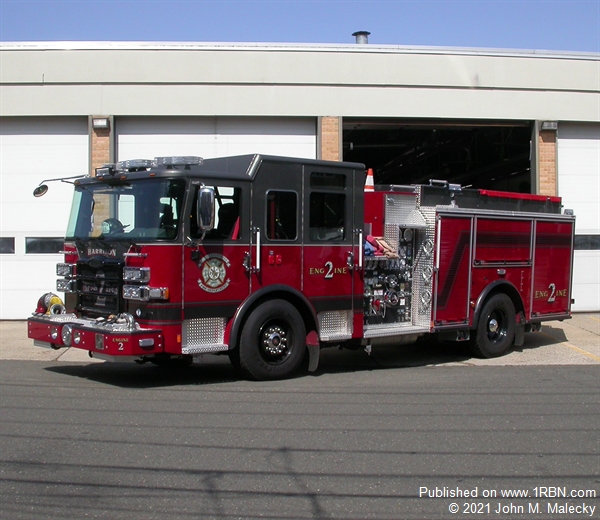 (Author's note: In the last column I had mentioned Gloucester City as being in Gloucester County. I had momentarily forgotten that it is Camden County.)

It’s time again to revisit Hudson County for more new deliveries! It was the September of 2019 issue when we last covered the county for the headline plus there were other deliveries that were featured since, but not enough to fill the entire column until now. Even now there are new deliveries that we did not have room for. Some information about the county itself is that it is the smallest in the state with 62-square-miles of land and water, but in contrast it is the most densely populated with over 600,000 residents. Union City is the most densely populated in the country of cities of 50,000 population and North Bergen is the second most hilliest town in the country second to San Francisco. There are 12 municipalities. As far as fire protection the North Hudson Regional Fire Rescue covers five of the 12 municipalities (Union City, West New York, Weehawken, North Bergen and Guttenburg). Of the rest, two are volunteer (East Newark and Secaucus) and the rest are career (Bayonne, Jersey City, Hoboken, Kearny and Harrison). At one time Guttenburg was volunteer but its stations are now repurposed. At one time there was a Hudson County Fire Department with a station at the Meadowview Psychiatric Hospital in Secaucus. The department also performed fire inspections of county buildings but the station is now disbanded and the last apparatus that was there is now part of the Secaucus Fire Department as a squad. Of the photos featured this month are two Ferrara units (Rescue 1 and Squad 1) of the NHRFR, an AEV Ford transit ambulance from Hoboken’s Volunteer Ambulance, a Ford/Medix Type III ambulance from the McCabe Ambulance Service a private company based in Bayonne, and three Pierce pumpers (two from Jersey City including one with a three-stage pump, and one from Harrison).

In dealer news, Defender Emergency Products has had its territory expanded to all 21 counties by Rosenbauer America. You may have noticed an ad in last month’s issue. They are also a dealer for Medix ambulances and have delivered to Valley Medical Transportation located in Fairfield (Essex County), a Medix SRH-148WD Type II van ambulance on a Ford 250 MR Transit chassis. It has a 3.5L Ecoboost gasoline engine, Whelen lighting, a 1000 watt inverter and a Ferno cot mount package.

New Jersey Emergency Vehicles has delivered two P.L. Custom Classic Type 1 ambulances to the Elizabeth FD (Union County). Both are on Ford F-550 chassis. One is a 4x4.

Absolute Fire Protection has received an order from Raritan Borough (Somerset County) for an E-ONE Typhoon 95-foot mid-mount platform. They are prepping the Typhoon rescue pumper for the Community FC in Middletown Township (Monmouth County) and the refurbished 2006 Cyclone II heavy rescue formerly from Teaneck and now with the Ramsey Rescue Squad (both Bergen County).

I would like to bring this month’s column to a close with a little trivia. Referring back to the beginning of this column when I corrected my error in stating in last month’s column that Gloucester City was in Gloucester County instead of Camden County. It would seem common sense that Gloucester City would be in the county of its name. However, common sense does not always apply. Just some examples are: the town of North Bergen (in Hudson County) is actually south of the Bergen County line. West New York (also Hudson County) is not in the state of New York. The Township of West Bradford, PA is actually about 290 miles “southeast” of the City of Bradford and neither is in Bradford County. East Chicago is in Indiana (not Illinois), East St. Louis is in Illinois (not Missouri) and West Memphis is in Arkansas (not Tennessee). Raritan Borough and Raritan Township, NJ are in two different counties. Finally, all three Plainfield’s in NJ (Plainfield, North Plainfield and South Plainfield) are next to each other, but are in three different counties!