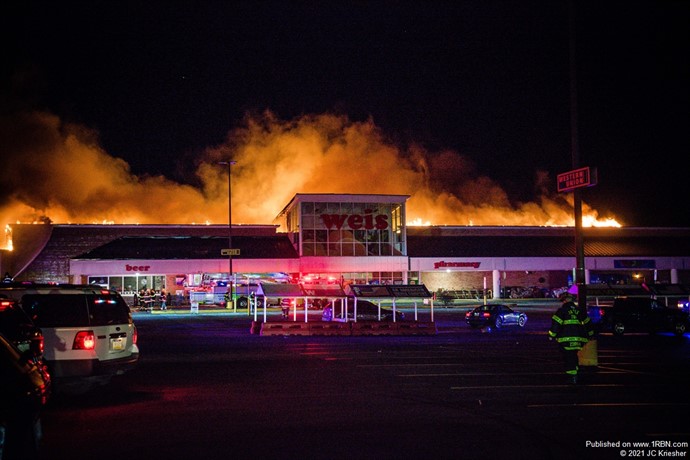 Photo by JC KriesherFlames consume the roof of the Weis Market in West Hazleton. Four alarms plus special calls were requested to the scene before the fire was brought under control. 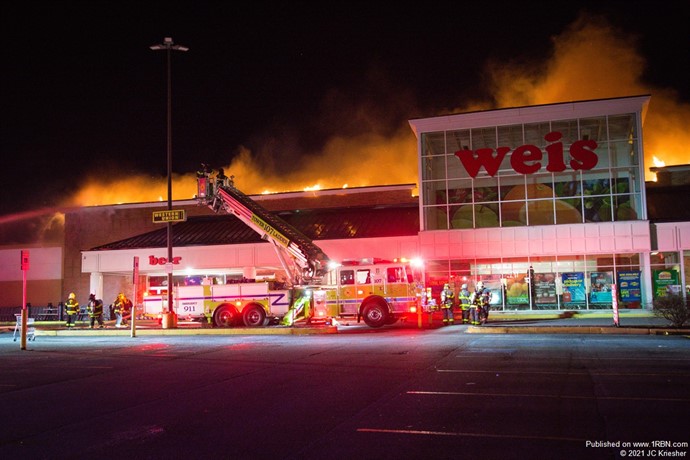 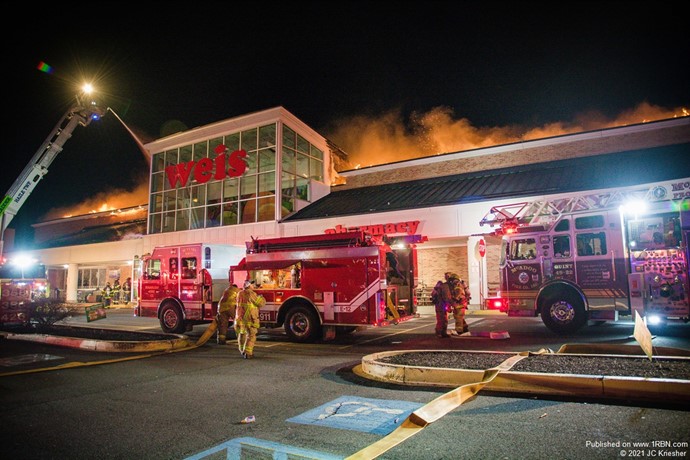 Photo by JC KriesherCrews from Luzerne, Schuylkill, Carbon and Montour Counties responded to this multiple-alarm fire. 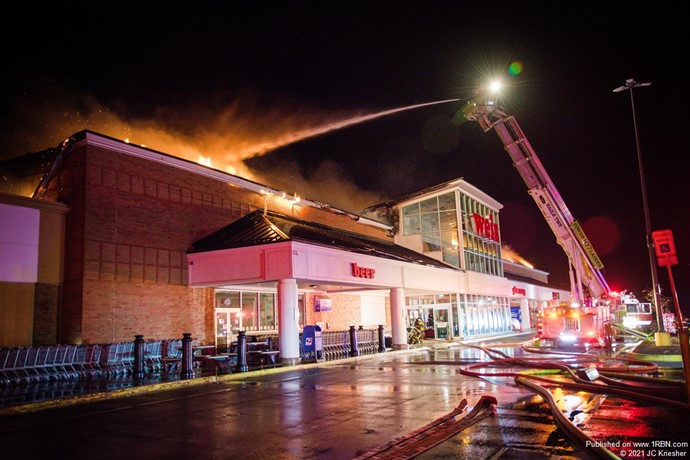 West Hazleton crews were advised of a call reporting a fire on the roof. 183 Car, 183 Engine 1 and Chief 4 arrived on the scene to find nothing showing. Command advised nothing visible after conducting a 360, but there was a haze in the building.

Engine 1 and 183 Truck were sent to the 'B/C' corner to go to the roof and evaluate the situation. At 9:40 P.M., the crew reported a working fire on the roof and requested a hand line to extinguish the fire. Command requested the engine lay in to the ladder on the 'C' side.

As a cold front was moving through the area, winds really began to pick up. Wind gusts peaked over 35MPH right around the time of the fire. While crews were attempting to extinguish the fire, the gusty wind took hold of the flames and rapidly spread the fire across the roof.

Command requested an engine and ladder from Hazleton City Fire 139. The wind continued to spread the fire at an exponential rate, which forced command to pull all units off the roof. A second-alarm was transmitted at 9:52 P.M.

At 9:58 P.M., a third-alarm was transmitted as fire consumed most of the roof of the building. The third-alarm included units from Hazle Township, Freeland and Harwood.

Hazle Township Tower 7 arrived on scene as the third due truck company and was assigned to the 'A' side to set up for master stream operations. 139 Engine 2 was flowing their deck gun onto the roof, but shut down to feed the ladder pipe. 183 and 139 trucks were already flowing their ladder pipes from the 'B/C' corner.

At 10:07 P.M., a fourth-alarm was transmitted to respond to the staging area. The fourth-alarm included Valley Regional 116, Foster Twp. 134, Wright Twp. 189 RIT and Schuylkill Engine 9-10 (Sheppton-Oneida).

Crews found fire appearing to be spreading into the 'B' exposure Pet Smart. Firefighters made access to Pet Smart to check for extension and evacuate the animals into the back of a Greater Hazleton ambulance.

McAdoo Ladder 49-22 arrived with Sugarloaf 177 Engine and both were sent to the 'A' side for ladder pipe operations. 177 Engine laid LDH from a hydrant on the 'D' side and supplied the scene.

Nuremberg Ladder 19-20 was set up next to McAdoo and also began to flow water. Freeland Truck 136 was sent to the 'C/D' corner for master stream ops while Harwood 241 Engine laid supply line from across the parking lot where 116 Engine had hooked up to a hydrant.

While all of the ladders were operating to knock down the fire, crews began to experience water shortages from their water supplies. 136 Engine was directed to a hydrant across Route 93 to secure additional supply. That crew reported the hydrant to be dry. McAdoo Tanker 49-30 laid hundreds of feet of LDH down Route 93 to the area of Valle High Drive-In to hook up to another hydrant.

After about an hour of pouring water on the building via master streams, the ladders were shut down and two crews accessed the building to check the interior. The crews reported the interior looked pretty good with the exception of the 'A' side where smoke was still pushing. The 'A' side ladder companies were put back into operation to drown out the fire.

The bulk of the fire was knocked down after 11:00 P.M. Rehab units from L&L Fire Company (Carbon County) and Danville (Montour County) were dispatched to the scene. A State Police Fire Marshal was requested to investigate the cause of the fire.

Crews began to clear up from the scene after midnight, with West Hazleton crews remaining on scene for most of the overnight hours.