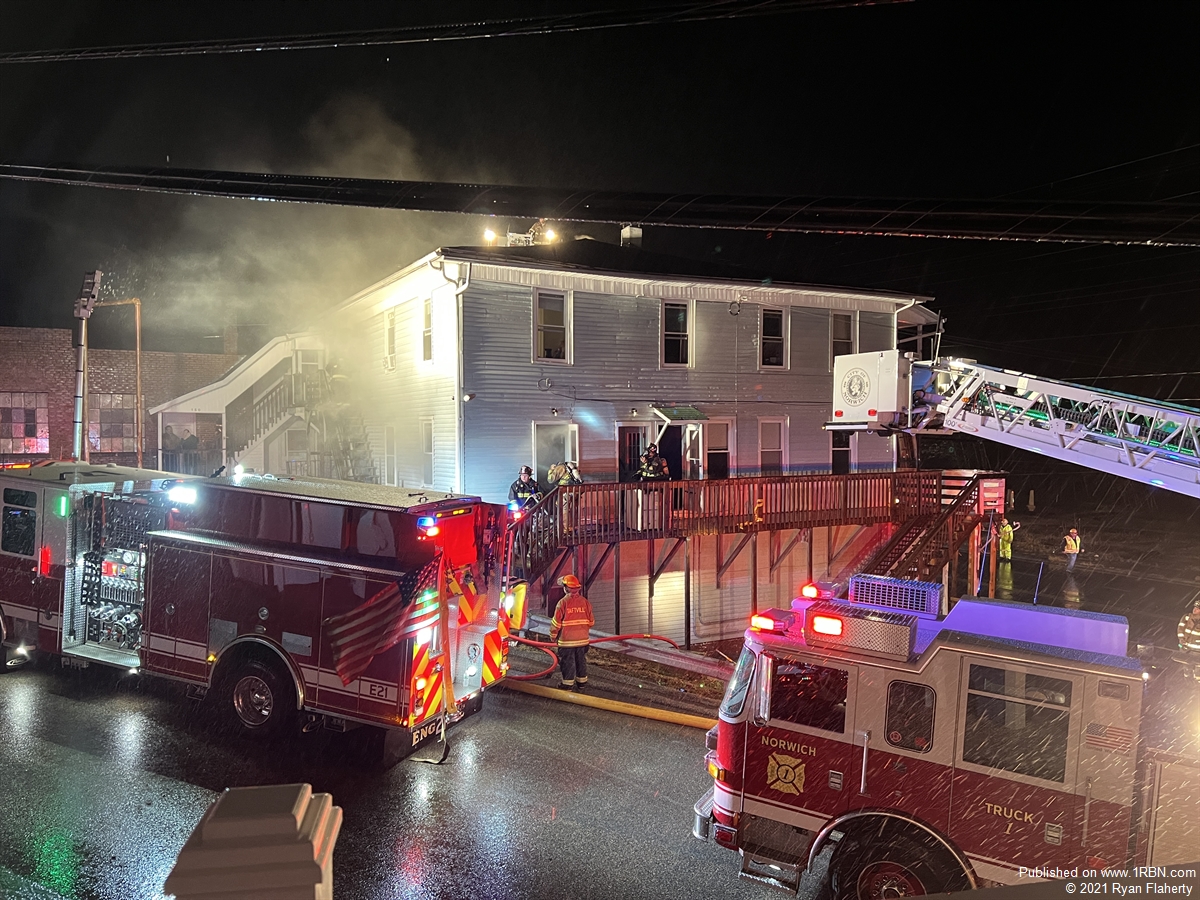 Photo by Ryan FlahertyVolume of smoke increasing from the rear while interior members are opening up. 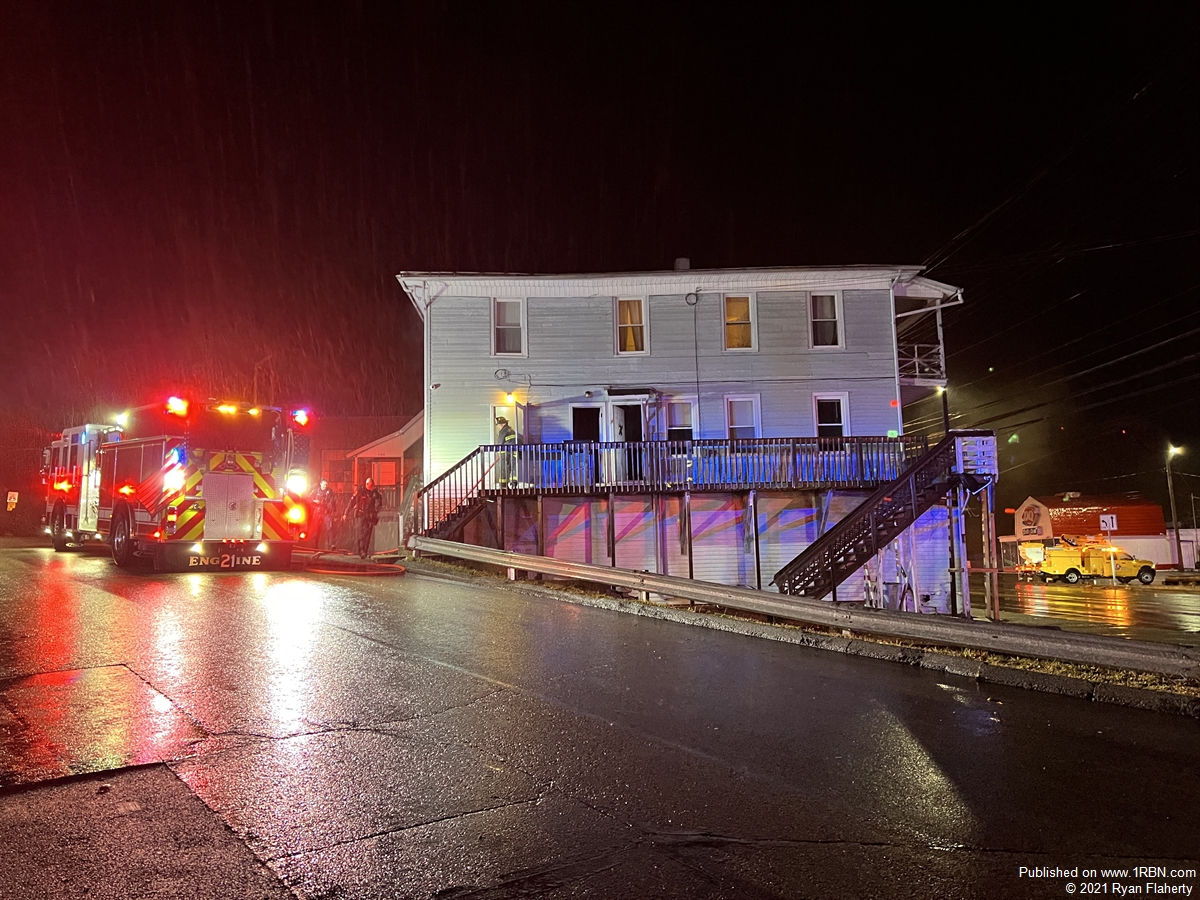 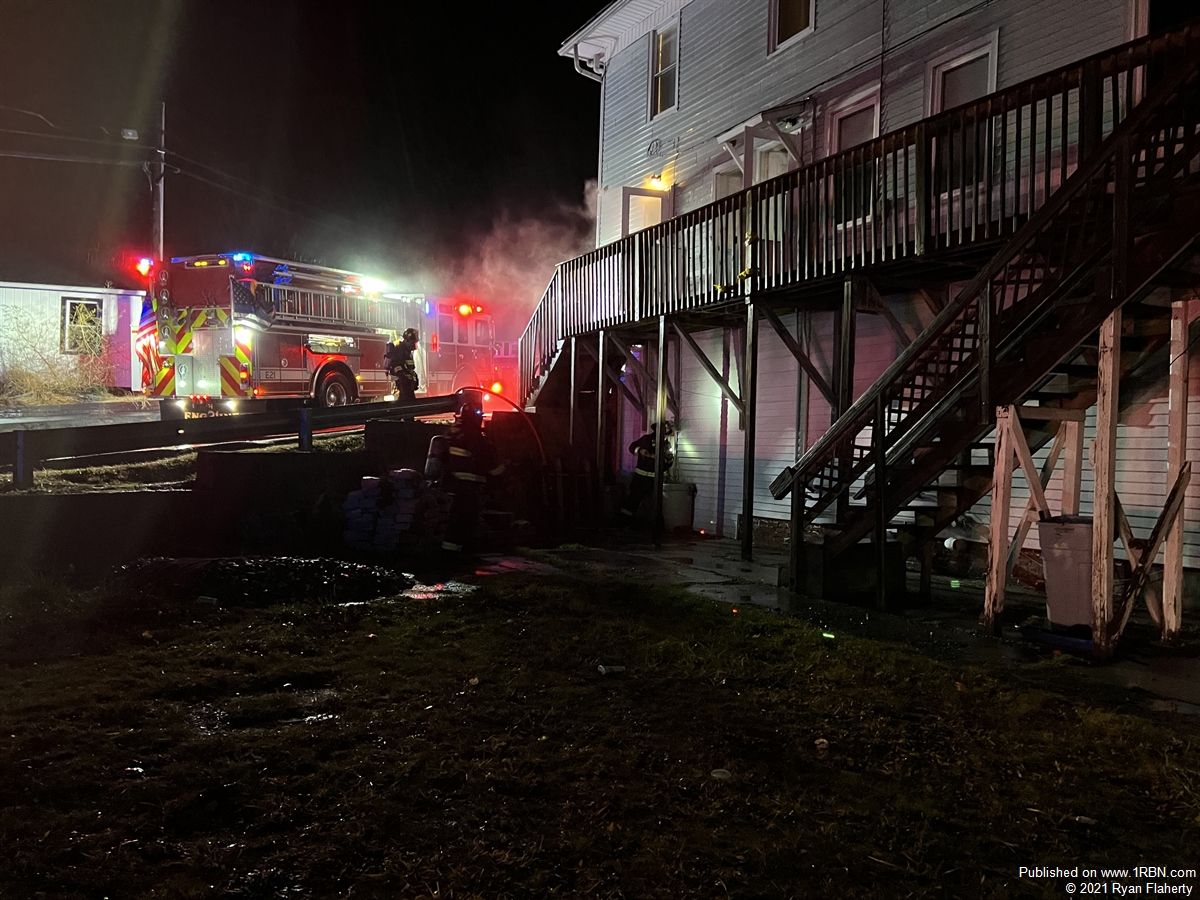 Photo by Ryan FlahertyTaftville firefighters forcing entry into the basement. 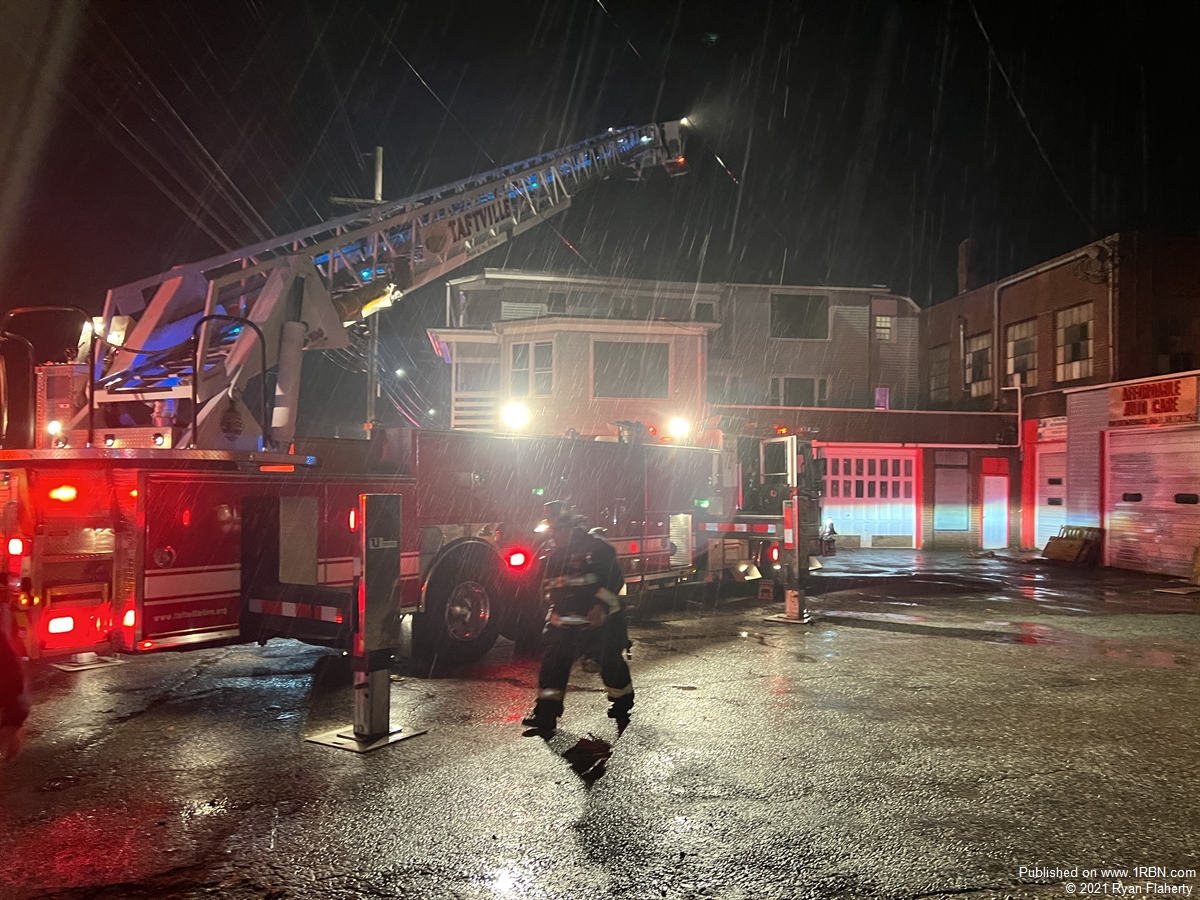 Photo by Ryan FlahertyTower 25 set up in a parking lot on the "delta" side. 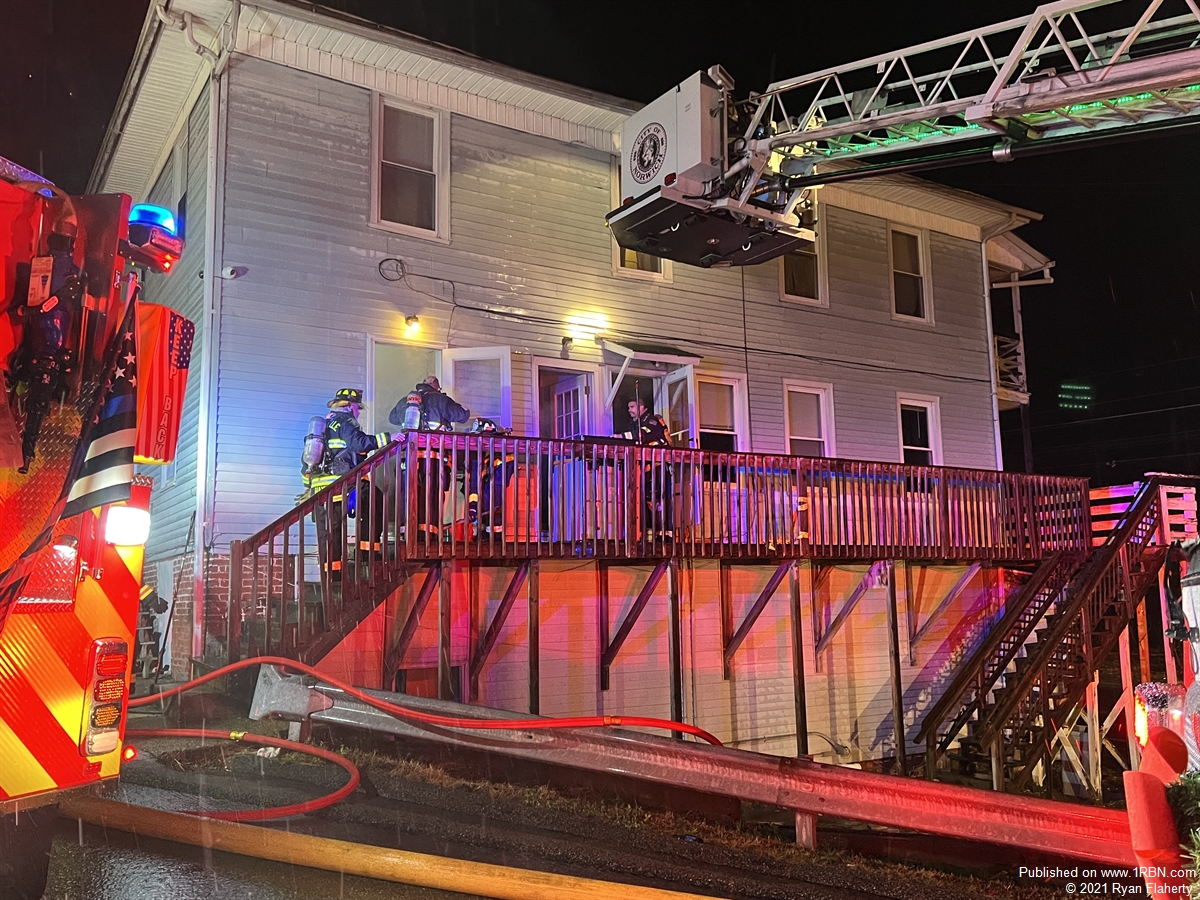 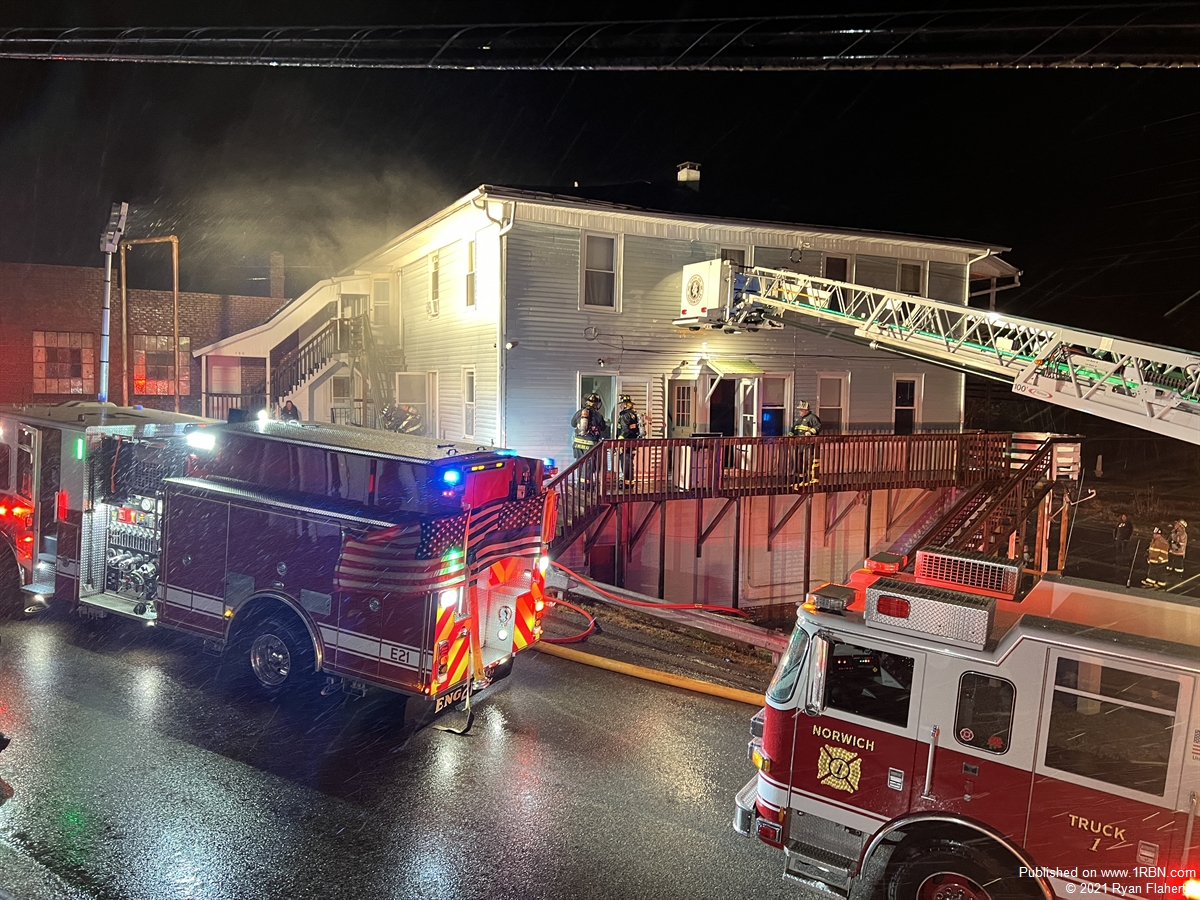 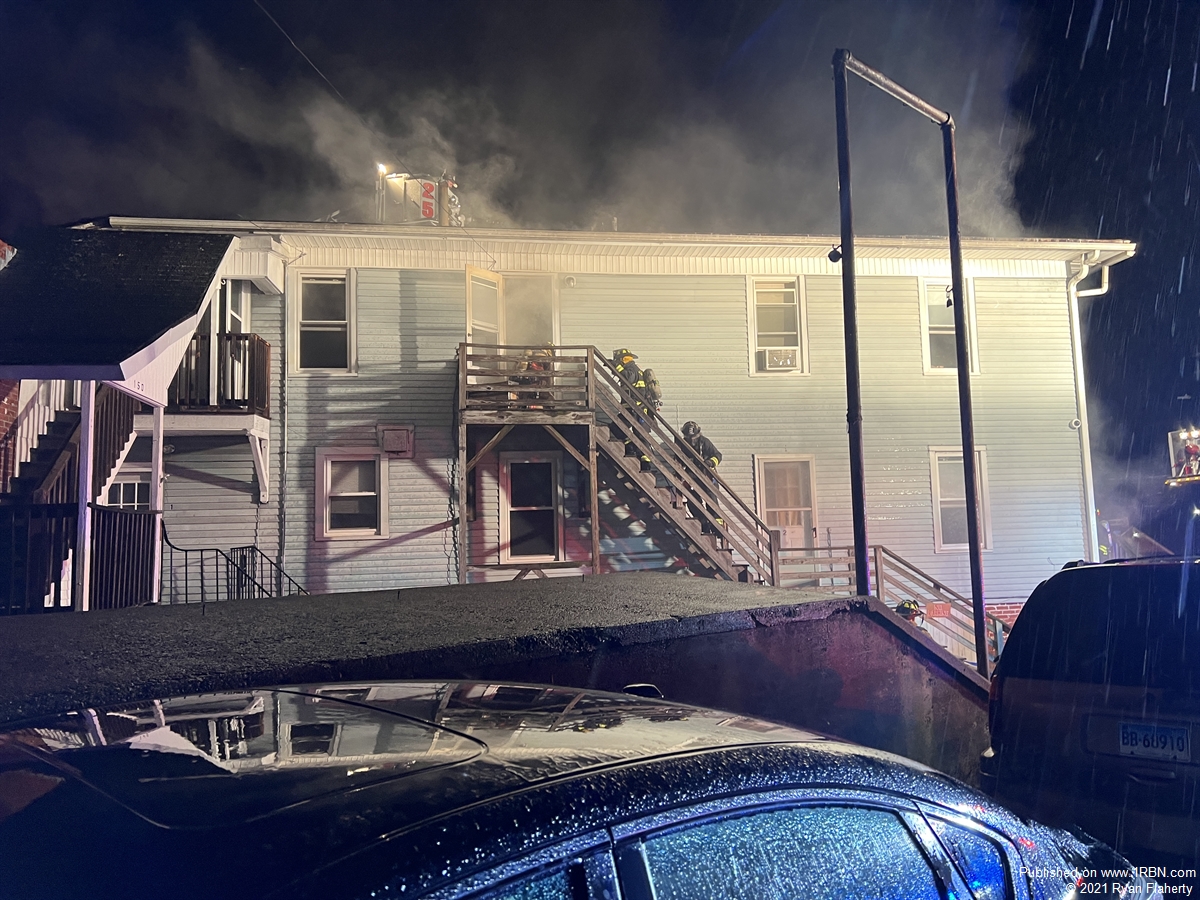 Photo by Ryan FlahertyA view from the rear. 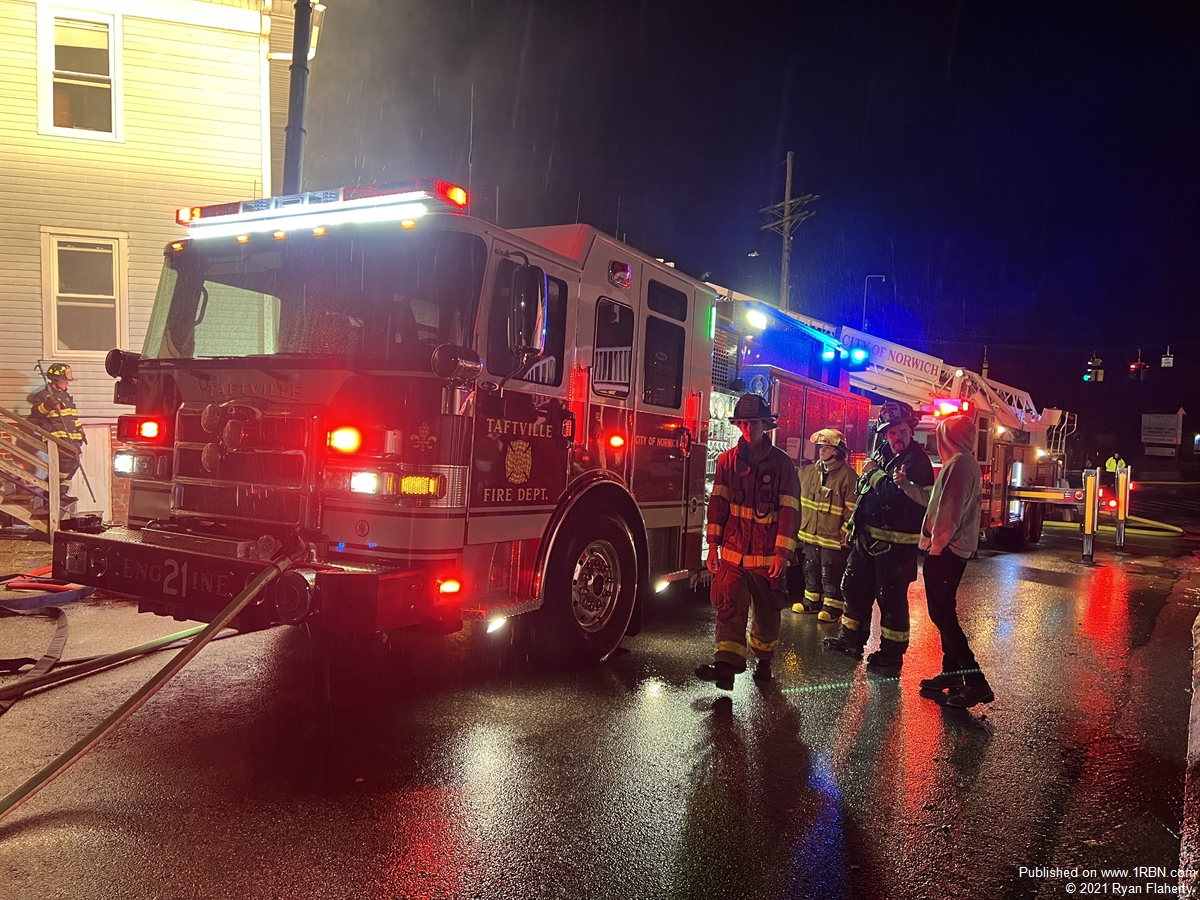 NORWICH, CT - At 10:57 P.M. on Saturday, December 11, 2021, the Taftville Fire Department was dispatched to 150 Norwich Avenue for three calls reporting a structure fire. Dispatch updated responding companies that they were taking more calls with a woman on oxygen trapped on the second floor porch, so Car 2 requested the working fire tone and added a full response from Occum with Norwich’s Engine 2 and Truck 1.

Engine 21 and Car 2 arrived at 11:03 P.M. with smoke showing from the second floor of a three-story, wood-frame multiple occupancy building. Engine 21 positioned on Prentice Street and stretched a one-and-three-quarter inch hose line into the rear apartment of the second floor where they were met with a good smoke condition. A crew then forced a first floor door on the 'Bravo' side and advanced a hose line where they found fire in the wall.

Tower 25 set up in a parking lot on the 'Delta' side and flew the aerial to the roof where they performed vertical ventilation. Engine 2 laid a supply line from a hydrant on Norwich Avenue which fed Engine 21. Engine 22 laid a line from a hydrant on the north side of the incident which fed Tower 25. Truck 1 set up on Prentice Street and flew the aerial to the third floor 'Bravo' side.

At 11:14 P.M., Command requested a Yantic engine for manpower, and shortly after that Squad A was also added. Crews from Taftville, Norwich, Occum and Yantic operated for about one hour chasing fire in the balloon frame construction and were able to save the building.

The Mohegan Tribal Fire Department provided the FAST and American Ambulance transported one person to the hospital. Baltic Engine 124 covered Occum while Engine 31 and Lisbon Tower 154 covered Taftville’s station. The American Red Cross was requested to assist, and the Norwich Fire Marshal’s Office is investigating.