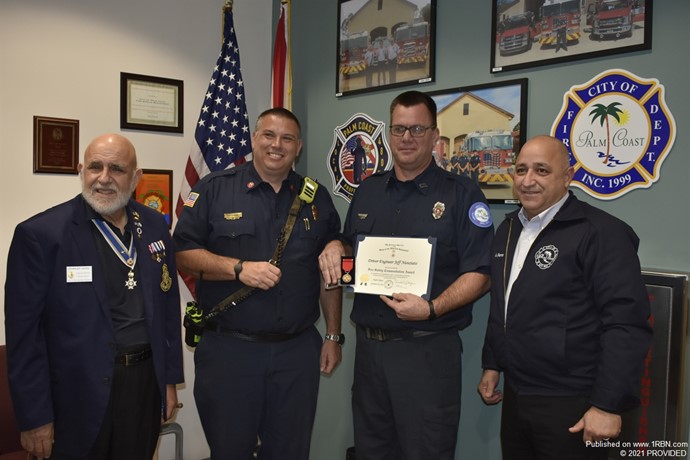 Kelsey said the Sons of the American Revolution were pleased that this year’s award recipient is a leader for training. “We realize that fire safety and service as a firefighter has become a very skilled profession – it’s very technical, and it requires a lot of training,” Kelsey said. “You need to have a plan.”

“It’s always a privilege for our Chapter to recognize a distinguished firefighter from the City of Palm Coast,” added SAR President Hayes.

The Sons of the American Revolution conducts its awards program annually. The organization is a historical, educational, and patriotic non-profit organization. The Flagler Chapter was organized in 1984 and the members are descendants of those early Americans who served in the Revolutionary War and established the United States. Its main goals are to maintain and preserve the institutions of American freedom, to promote patriotism and to provide recognition for outstanding public service.

Forte said the City of Palm Coast is fortunate to have Nunziato with his experience. He describes Nunziato as a role model to many of the Driver Engineers, by providing them strong mentorship in developing the future drivers of the department. “Driver Engineer Nunziato has made significant contributions to developing our Driver Engineer Field Training Program,” Forte said. “As someone who is consistently steady in all that he does, he has been an instrumental part in developing future generations of Driver Engineers.”

Nunziato joined the Palm Coast Fire Department in 1992 as a volunteer firefighter. He completed his Fire Training for Firefighting and EMT at Daytona State College. He transitioned to being a career firefighter in Palm Coast in 2006. He was promoted to Driver Engineer in 2017; most recently he successfully passed the Lieutenant promotional assessment. He is scheduled to be formally promoted to Lieutenant in January 2022. He and his wife Julie have three children.